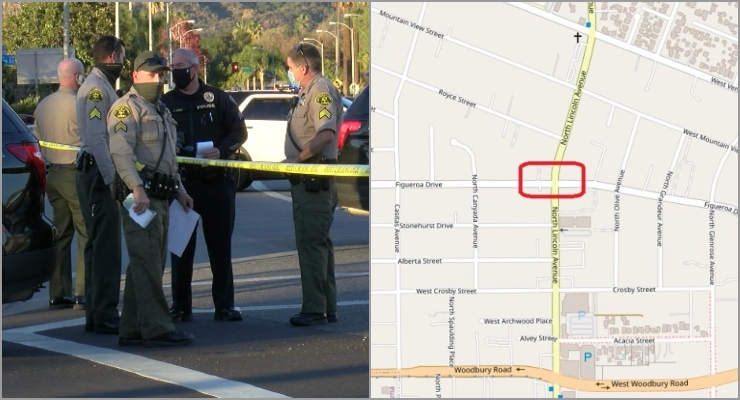 A man reportedly was killed in Altadena during a deputy-involved shooting Sunday afternoon about 4:08 p.m.

Social media reports indicate that person may have been stabbed.

It is unknown what led up to the shooting.

News reports showed a body in the street near the intersection of Lincoln Ave and Figueroa Dr. in Altadena. The Los Angeles County Development Authority announced Wednesday it is launching a webinar program to help businesses navigate economic uncertainty amid COVID-19 and prepare for a post-pandemic economy.

The series of webinars offering support and resources will begin on Jan. 12, according to LACDA officials.

“Local small businesses in the County of Los Angeles continue to face obstacles when it comes to securing resources,” Board of Supervisors Chair Hilda L. Solis said. “By lifting up this sector, we can spur innovation, bring back jobs, preserve community character, encourage development and ensure generational prosperity.”

Business operators have to register to participate in the program. Anticipating Los Angeles County’s fair share of $25 billion in federal rent relief, the Board of Supervisors voted unanimously today to extend and expand both a local rent relief program and eviction moratorium.

Supervisors Hilda Solis and Janice Hahn co-authored a motion calling for more flexibility in the rent relief program, which will now also be extended for another year — through Dec. 31.

“Hundreds of thousands are struggling to pay their rent on time or even to pay it at all,” Hahn said.

The relief program and moratorium will not impact Pasadena which has its own rent moratorium. However, it would place restrictions on landlords in Altadena and nearby unincorporated areas.

Solis said the changes would expand eligibility and align the county’s program with conditions that apply to new federal relief dollars.

“Since the program launched, many constituents have reached out to my office pleading for help as landlords refuse to receive direct payments from the Los Angeles County Development Authority, Despite Tuesday’s confirmation that a new and more contagious variant of COVID-19 has been detected in Colorado, the strain has not yet been found in the Southland, but Los Angeles County’s public health director said there’s a good chance it’s already here.

Colorado’s confirmation of the new strain, which was first discovered in the United Kingdom, is the first detection of the variant in the United States. Colorado officials said the patient was a man in his 20s who had no recent history of traveling.

The new strain, known as B.1.1.7, is not thought to cause more severe illness than the original virus, but it is believed to be dramatically more contagious — meaning it is far more easily transmitted from one person to the next.

Los Angeles County Public Health Director Barbara Ferrer said Monday local health officials have tested a limited number of samples from COVID- positive patients, and “we have not found any evidence of the variant in that first group of tests that we ran.”

“We are truly honored to be a good neighbor in our community and take pride in always paying it forward,” store owners Michell and Michale Guajardo said in a message appearing Monday on Twitter.

“Grocery Outlet’s mission is ‘Touching Lives for the Better,’ (and) this is something that we constantly try to live by as local business owners and as members of the Altadena community,” the couple wrote.

Something they are really proud of is their annual national food drive campaign, Independence From Hunger.

During the month of July, Grocery Outlet stores collect food and cash donations, “and this year, our store raised $16,000, which was donated to our local food banks and partner organizations like Friends In Deed,” the Guajardos wrote.

With a matching donation, “our total was brought to $23,000, all of which stayed local and was used to help families in our own community,” they wrote.

3 Victims Wounded in 5 Separate Shootings in Altadena on Sunday; 3 Suspects in Custody

The first in the series of shootings took place about 12:10 p.m. in the 3100 block of Santa Anita Ave, according to Deputy Morgan Arteaga of the Los Angeles County Sheriff’s Department’s Information Bureau.

A witness reported hearing about 15 gunshots and seeing a person running from the area, she said. A person was wounded in the attack, but no description of the victim was available.

Gunfire again rang out about 12:55 p.m. in the 3100 block of Olive Avenue, Arteaga said. Initial reports indicated a person was shot in the area and then fled into a nearby home. 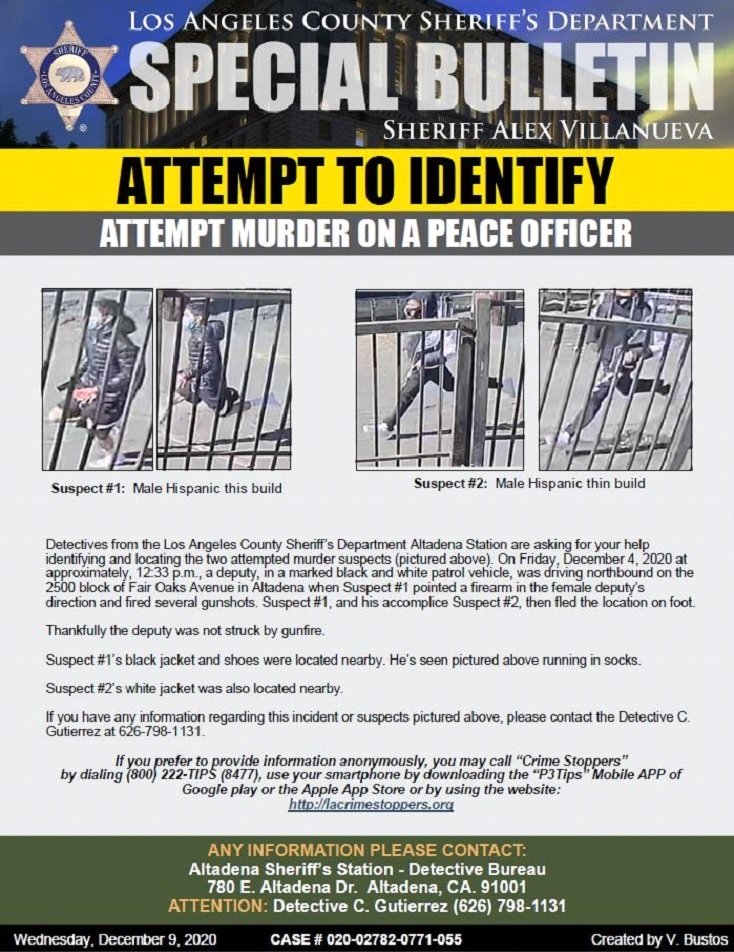 The Los Angeles County Board of Supervisors on Monday authorized a $50,000 reward in connection with an attack on a sheriff’s deputy who was fired upon in what officials described as an “ambush” earlier this month.

The deputy was not injured in the attack, which took place about 12:30 p.m. along Fair Oaks Avenue, near Mountain View Street, L.A. County Sheriff’s officials said.

Monday’s reward was initiated via a motion by Supervisor Kathryn Barger, whose district includes Altadena.

“This was an unprovoked and heinous act perpetrated against a law enforcement member who has dedicated their profession to serving our community,” Barger said. “We continue to ask so much of law enforcement and we must stand by them in their time of need.”

The deputy was on patrol in a marked car when she came upon a “crime in progress,” according to Deputy Grace Medrano of the Sheriff’s Information Bureau.

“As she approached the group in her vehicle, 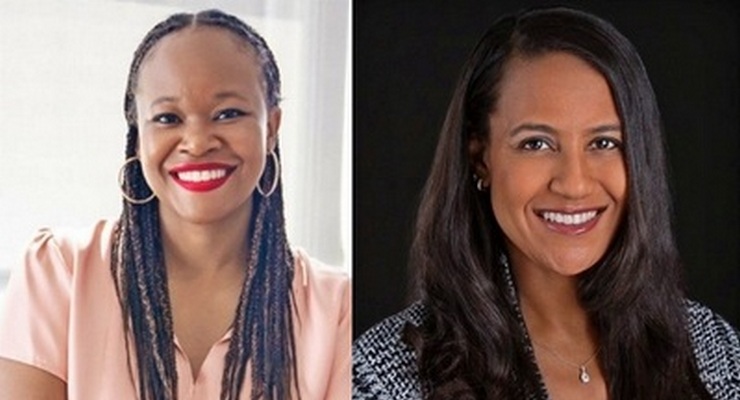 Holiday Efforts Bring Cheer and Assistance to Locals, Courtesy of the Pasadena-Altadena Chapter of The Links, Incorporated

Good cheer and great energy describe this year’s fundraising campaign sponsored by The Pasadena-Altadena Chapter of The Links, Incorporated.

Co-Chairs Link Shelby Larkin-Reid and Link Tara Newman-Rahman head up the safe and easy effort by reaching out to all friends old and new with several opportunities to join the Chapter in good cheer.

This holiday season began with a contribution of hearts, hands, and funds to make the food pantry at First AME Church the best ever for donations in late November.

Members personally delivered four turkeys, cranberry sauce and donated cash.  The chapter contributed additional funds from the Chapter Meal Fee Reimbursement, bringing the total contribution to $400.00.  All of the funds were used to purchase turkeys.

Furthermore, a Holiday Greeting letter, highlighting the Chapter’s accomplished services and hopes for the future crowns the season by raising funds, by raising awareness.

Donations may be made electronically, this year, with the help of PACEF, our not-for-profit investment partner by visiting https://pasadenaaltadenalinksinc.org/ . As Gov. Gavin Newsom watched a Los Angeles health care worker receive the first coronavirus vaccine injection today, Pasadena health officials were still waiting for word on when the vaccine would make it to the city.

The vaccine began reaching hospitals across the country this morning. Health care workers and other frontline workers will receive the first doses, along with patients in assisted living facilities.

Pasadena will initially receive 1,900 doses sometime this week, according to city officials.

Thousands of doses of the vaccine arrived at Los Angeles International Airport Sunday night, marking the first step in a massive undertaking that will see the county attempt to vaccinate six million people in six months.

LAX officials trumpeted the arrival of the vaccine on Twitter, posting photos of the FedEx jetliner carrying the vaccine, which received formal approval for immediate use from federal authorities over the weekend.

Meanwhile, officials at Huntington Hospital said they were awaiting information about the vaccine’s exact delivery date. 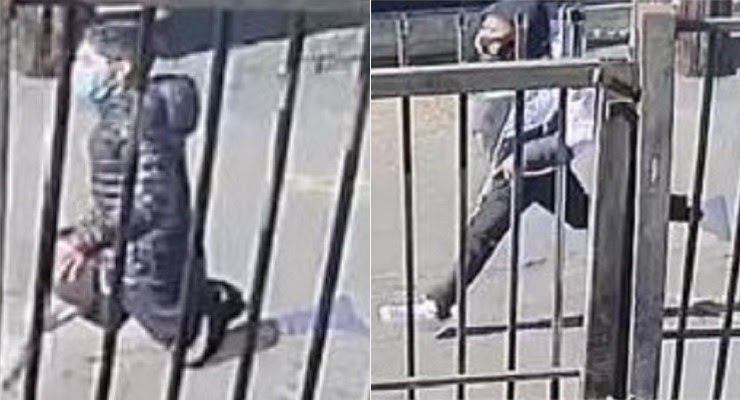 Detectives released surveillance camera images Wednesday of two suspects who they say opened fire on a Los Angeles County sheriff’s deputy in a seemingly random “ambush” in Altadena on Friday.

The deputy was not injured in the attack, which took place about 12:30 p.m. along Fair Oaks Avenue, near Mountain View Street, Los Angeles County Sheriff’s Department officials said.

She was driving her marked patrol car north along Fair Oaks Avenue when a man fired several rounds at her, according to Deputy Shawn Du Busky of the Sheriff’s Information Bureau.

“Thankfully the deputy was not struck by gunfire,” he said in a written statement.

The shooter, who was accompanied by a second man, then ran into the surrounding neighborhood, officials said.

Deputies searched the area for hours, but the two suspects were not found.

They were both described only as Latino men estimated to be in their 20s, both of thin build.