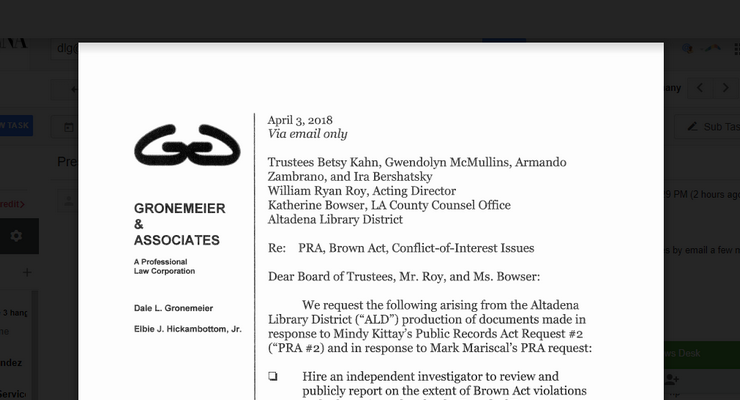 An attorney representing Altadena Library District’s executive director on Tuesday demanded an independent investigation into allegations of public meeting law violations and other issues, threatening a to release a series of “embarrassing” emails obtained through public records requests in coming months if action is not taken.

The demand came in the form of a seven-page letter sent to the ALD’s Board of Trustees by attorney Dale Gronemeier, who represents the library’s executive director Mindy Kittay, who is currently out on stress leave due to harassment by the board, according to the attorney.

He and his colleague, attorney Skip Hickambottom, appeared at last Thursday’s special meeting of the board of trustees, where they alleged repeated Brown Act violations, harassment against Kittay, and the attempted deletion of emails evidencing those allegations by then-board president John McDonald. The attorneys allege the board has harassed Kittay in retaliation for pointing out previous Brown Act violations.

The lawyers distributed emails chains they had obtained through public records requests as evidence of the alleged misdeeds. Trustees deferred comment at the time to McDonald, who was absent from Thursday’s meeting and announced his resignation the following day.

“Those statements are only the tip of the iceberg of Brown Act violation in the emails already in our possession,” Gronemeier wrote in his letter to the board. “They barely even begin publicizing the whistle-blower animus, and they do not address any of the libelous statements (against Kittay).

“Only a few of the worms in the can have been brought to public attention. The ALD needs to decide now whether it wants embarrassing email after email dripping out month-by-month because we have to resort to public shaming of the Library leadership in order to address these issues,” he said. “Instead, the ALD needs to proactively address these issues by hiring an independent investigator to look into the problems and by issuing a public report from the independent investigator.”

In his letter, Gronemeier made four demands: the hiring of an independent investigator; a review of redactions made in board emails based on attorney-client privilege; an independent review of those redactions; and that board members Ira Bershatsky, Armando Zambrando and Gwendoyln McMullins due to their culpability in the alleged violations.

Acting Director William Ryan Roy, contacted in connection with this story, responded by saying that he has no comment at this time.