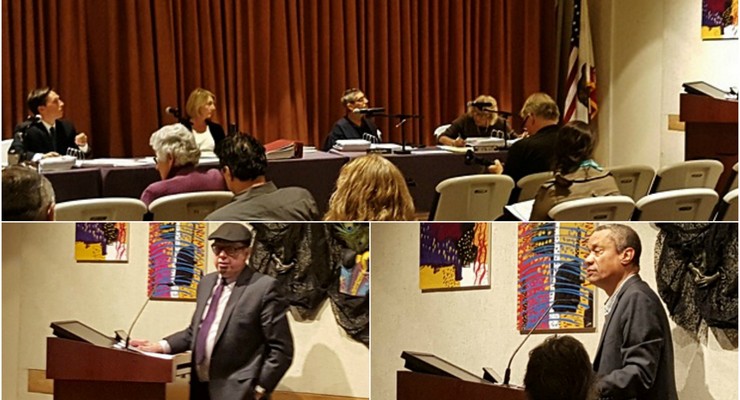 Two attorneys representing the Altadena Library District’s Executive Director laid out allegations Thursday that the Board of Library Trustees president and two other members have engaged in a campaign to harass her, prompting her to take a medical leave due to stress, as well violating California’s open government statutes.

Lawyers Dale Gronemeier and Skip Hickambottom appeared on behalf of their client, Mindy Kittay, during a special board meeting on Thursday night. The attorneys distributed emails obtained via public information requests to back up their allegations of wrongdoing by the board’s three male members: President John McDonald, Trustee Armando Zambrano and Trustee Ira Bershatsky.

“I’m here to call out Board of Trustees President John McDonald and board members Ira Bershatsky and Armando Zambrano for their persistent violations of board by-laws and the Brown Act by their misconduct in preparing the board’s agendas and discussing in secret emails agenda items,” Gronemeier said.

McDonald was absent from Thursday’s meeting due to an “excused absence,” Zambrano said. Zambrano and Bershatsky declined to comment on the allegations,deferring  to McDonald.

The attorneys further claimed that McDonald tried to delete some of the emails, but they were ultimately recovered by computer technicians fulfilling a public information request.

One Jan. 23 email conversation produced by the attorneys includes the three male board members talking about selecting Public Services Director Ryan Roy to be interim executive director to replace Kittay during her leave, which began in mid-January. Roy was installed via an official vote at a board meeting on Jan. 25.

“The open public meeting requirements cannot be circumvented by board member serial meetings between them which make a decision or commit to making a decision prior to a public meeting,” according to Gronemeier. “The fact that the board later formally voted to appoint Mr. Roy when a majority of the board had previously agreed does not change that there was a Brown Act violation.”

“McDonald then compounded this Brown Act violation by trying to destroy his Jan. 23 email string because he knew there would likely be a Public Records Act request for it,” Gronemeier said. McDonald deleted the conversations from his email, then further deleted them from the “trash” folder in his email, the lawyer said.

The attorney’s also accused the three board members of similar Brown Act violations by discussing through emails matters including personnel issues, revising board by-laws and the selection of the current board of trustees president in recent months.

Hickambottom said it appeared the issue centered on the “male majority” of the board.

“To her credit, Board Member Gwendolyn McMullins did not send a reply to the email,” Gronemeier added. The board’s fifth member, Betsy Kahn, just began her term earlier this month.

In response to Gronemeier’s allegation that the process of revising the board’s by-laws was improper, McMullins said the ongoing process has been transparent, and the by-laws haven’t been updated for a decade.

“The by-laws committee has been meeting on the by-laws, which are posted online,” she said.

Committee meetings were held to discuss the revised by-laws on March 21 and March 28, and another is scheduled on April 11, McMullins said.

“Anyone who would like to be a part of that is welcome,” McMullins said. “Ms. Kittay did have an opportunity to make comments on (the by-laws), and we’re considering them.”

In addition to violating government transparency laws, Hickambottom and Gronemeier also said their client, Kittay, was the target of harassment by the male board members in retaliation for pointing out past Brown Act violations.

A November email exchange between Zambrano and Bershatsky, in which they discuss who will become the next board president, was “a plain and clear violation of the Brown Act,” Hickambottom said.

“Both you and John will do fine,” Zambrano wrote to then-board president Bershatsky, after stating that he himself was not interested in the position of board president. “But if you want to avoid the heat for a term, then maybe it’s a good time for John to ascend. I expect the next 7 months will be busy for all of us.”

“And miss out on all the fun after experiencing the heat for the last year?” Bershatsky replied.

Gronemeier said the “heat” Bershatsky mentioned was his conflicts with Kittay, “primarily over the Brown Act.”

Hickambottom said, “’all the fun that is about to begin’ refers to the scheme discussed (via emails) that McDonald described as ‘documenting’ the executive director’s purported job performance failures for her annual review.”

In advance of Kittay’s upcoming performance review, McDonald wrote in a Nov. 18 email chain including Zambrano and Bershatsky, “We will need to start documenting the job performance failures as part of the process.”

The improper actions of the three board members prompted Kittay to take a medical leave to to stress, according to the attorneys.

There are no immediate plans to file a lawsuit, Gronemeier said. He added that it was still early in the fact-finding process.

He said he called on the three board members to “publicly admit your crime, publicly apologize and publicly agree never to do it again.”

Gronemeier said he planned to obtain board emails authored between Thursday’s meeting and the meeting prior.

“If, as we expect to be true, the male board majority repeated the violations for the November meeting in setting today’s agenda, we well take the appropriate legal steps concerning what happened with today’s agenda. So be warned,” he said.