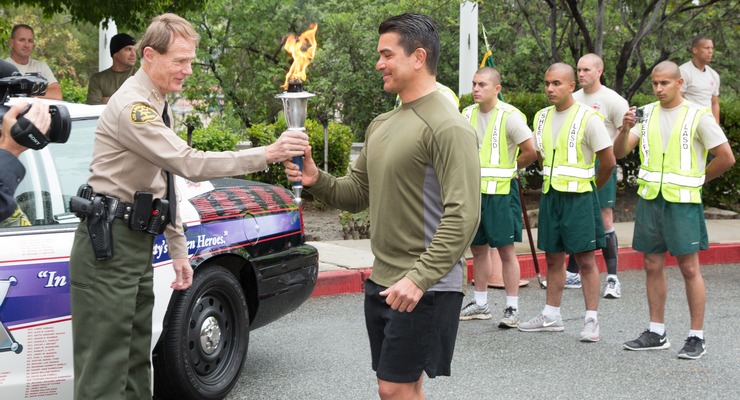 Executive Officer Neal Tyler led the ceremony this morning on the footsteps of the Sheriff’s Headquarters Building and recalled the reason for this important run: To honor the memory of the brave and dedicated peace officers in Los Angeles County who sacrificed their lives in the performance of their duties.

During his speech recalling the incidents in which our fallen brothers were taken, Tyler solemnly reminded all in attendance, “There is never an easy day for a guardian.”

The Memorial Torch Relay Run takes place during National Police Week, a time designated in 1962 by President John F. Kennedy to nationally honor those who paid the ultimate sacrifice.

Many off-duty sworn and civilian Sheriff’s Department personnel from the Sheriff’s Information Bureau, Personnel Administration, Custody Operations, and Court Services Division participated in the race. Recruits of currently-training Academy Class 406 ran in formation, commencing the journey with a lap around the Sheriff’s Headquarters parking lot, making their support known with enthusiastic jodies and thunderous claps.

The Memorial Torch Relay Run was established in 1976. It consists of 58 legs of varying distance, and began its non-stop journey today from the Sherman Block Sheriff’s Headquarters building in Monterey Park. The Torch will continue to travel over 300 miles, leading the way of each leg. It will be held by one runner from each of the mainland Sheriff’s stations throughout the three-day, 24/7 race. Nearly 2,000 runners will participate in the relay.

Today, eighteen fallen heroes are being honored, four of whom gave their lives in the line of duty since 2014:

In addition, historical research has determined that 14 of these officers are from the distant past who died in the line of duty between 1853 and 2000. These names will be added to the Memorial Wall: