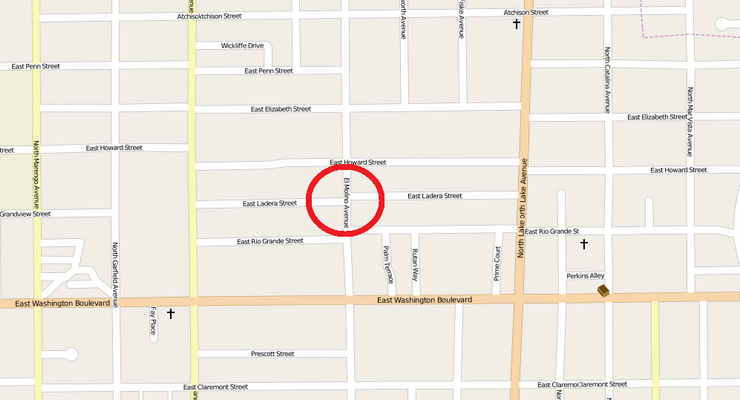 The high-speed pursuit of a stolen vehicle on the Foothill 210 Freeway careened onto Pasadena city streets and up Lake Avenue to Altadena’s border Saturday night before ending with a crash — this time, with far less serious consequences than Friday night’s horrific Colorado Street bridge collision.

Pasadena Police Sergeant Carrillo said tonight’s pursuit took to Pasadena city streets at the 210’s Lake Avenue offramp about 8:30 p.m. where the suspect driving the stolen vehicle headed north at such a high rate of speed that pursuing CHP units lost the car and called off their pursuit in the area of North Lake Avenue at Washington Boulevard.

The stolen car continued to flee north towards Altadena.

“Based on what witnesses were able to tell us, the driver lost control and it looks like he may have hit the curb and flipped and come to a resting point overturned on the front lawn of [a] residence,” Carrillo said.

The residence is located in the 1400 block of North El Molino Avenue. It is on the northwest corner of the intersection with East Ladera Street, authorities said.

Pasadena police responding to the 8:44 p.m. accident initially were unaware that the collision was related to the CHP pursuit, Carrillo said.

Carrillo said that the suspect or suspects remain at large.