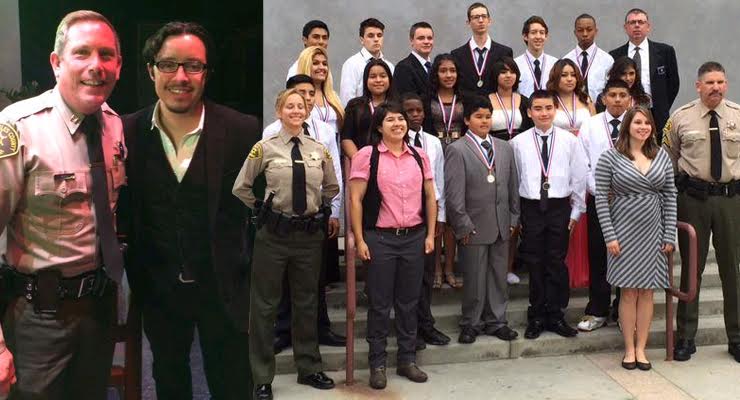 Several Altadena students graduated from the Sheriff’s VIDA Program last Saturday, June 6. The Vital Intervention and Directional Alternatives program, where youth ages 11 to 17 ½ take part in activities that are meant to encourage the kids to making good decisions in their young life, and realize the possibilities for a better future.

This particular class that graduated last Saturday started their immersion on February 11 this year, and went through 16 weeks of activities designed for the participants to increase their academic performance, improve family relations, and develop positive social behavior.

Actor and LA native Efren Ramirez, who starred in the indie film series “Napoleon Dynamite,” was the keynote speaker during the graduation ceremony.

Capt. Christopher J. Reed, station commander of the Altadena Sheriff’s Station, dropped by to congratulate the graduates. It was Capt. Reed’s team that facilitated most of the training sessions under the program.

The VIDA program was conceived by the Los Angeles Sheriff’s Department as an avenue for deputies who wanted to help troubled youths and their families. The first classes began in East LA in 1996, and the program went countywide in 2000. Since then, a number of community-based organizations, volunteers, schools and families have taken an active role in implementing the program.

Participants are usually referred from a community agency that has identified troubled youth. Upon referral, the youths go through intake interviews with trained VIDA staff members, who assess the applicant and determines whether he or she meets the program’s targeted level of moderate to high risk.

The program includes regular visits with VIDA staff members, a Saturday component, and weekly sessions with the child and parent to facilitate communication and understanding in the family. Participants receive a certification of completion after the course, and are referred to other youth-oriented development programs to continue their growth.

About schedules, the program runs concurrent to the school year. According to the VIDA website, www.vida.la, this year’s fall class is set to start on August 8th.