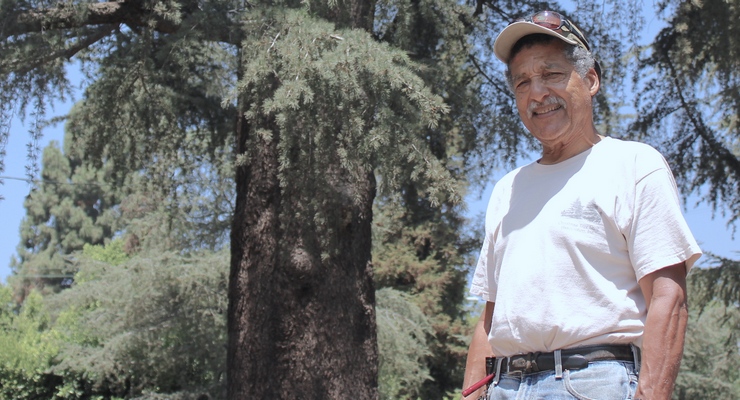 Story and Photography by BRANDON VILLALOVOS

With the drought and water conservation already threatening trees, residents along Altadena’s historic Christmas Tree Lane were quick to band together when they heard earlier this month that water to a section of the lane’s beloved trees growing on a median would be cut off.

“Last week the [Los Angeles County Department] Department of Public Works tree maintenance managers told us we cannot use the system for this drought event as it no longer meets modern standards,” Christmas Tree Lane Association Foreman Tony Ward said Tuesday. “They indicated they were not going to provide needed repairs or allow our volunteers to do so because there is a new policy that water paid for by the county could no longer be utilized for median landscaping purposes.”

Christmas Tree Lane, which lines Santa Rosa Avenue from Woodbury Road on the south to Altadena Drive on the north, is home to approximately tall 150 Deodar trees that rely on adequate water to keep them alive and well, especially during the record drought, said Ward, who, as a resident since 1971, was involved in the installation of the 1979 irrigation system that waters the select 24 Deodar trees growing on a median.

Without the system, the trees will die if an adequate source of water doesn’t replace the current irrigation, said Ward.

Armed with concerns from residents over the potential killing of the trees, Ward appealed to Los Angeles County Supervisor Michael Antonovich, asking him to intervene to keep the water flowing to the trees, and hence, the Christmas Tree Lance tradition alive this season.

“We pointed out to Mr. Antonovich’s office that we were not doing ornamental watering; we’re doing drought condition watering,” noted Ward, who organized an online petition urging the county to keep the water flowing to these historic trees.

Ward, who says the drought has affected the trees and the soil severely, explains that three of the two dozen Deodars are in bad shape and visibly dying.

He says residents have sacrificed their lawns to allocate water to the trees and even that has not been enough to keep the trees healthy.

Three days after going to Antonovich’s office, the County rescinded its plan and equipped the isolated median on Santa Rosa Avenue and Calaveras Street with an irrigation system.

“I could only surmise that they found that the community supported the efforts of CTL (Christmas Tree Lane) and liked the idea of maintaining this landmark,” said Ward.

“As soon as we got the email from the CTLA, we told them ‘we’re on it,’” said Supervisor Antonovich’s Spokesman Tony Bell. “We called Public Works and took care of it. They went out there and fixed the line.”

Antonovich’s office was not aware of the online petition.

“The Supervisor told them that the Christmas Tree Lane is a regional attraction and that it’s an important resource for the community. So they went out there and fixed it. It wasn’t a big issue. It was something they were easily capable of doing,” said Bell. 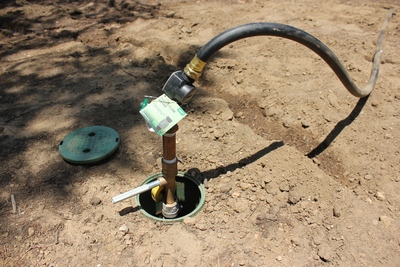 According to Ward, the county installed new water couplings equipped with digital meters that efficiently monitor and distribute ground water and adhere to modern standards. The fix was quick and necessary, but is only the beginning to creating a permanent fix, he said.

“The County said they would like for us to get about 700 gallons of water per tree into the ground by mid August when they will consider having a commercial water company then apply some type of chemical or nutrient that is supposed to help these trees get through this period and accept water better. That’s what we are doing right now,” Ward said.

Ward and CTL Association volunteers have been busy testing out a few methods to determine what works best and what will serve as a long-term solution for watering the large trees. Some methods include filling well-type structures to soak the roots and creating surface-style waterways in the soil to zig-zag along the downward slope for even water distribution.

“Right now there are no means to specifically get water to the trees so we have to come up with a means,” said Ward. “We need the county arborists to approve the means because we don’t want to do more harm than good and if they approve it then we will implement it and then go from there.”

The CLTA’s priority is nursing the three sick trees back to health before making any grand plans to battle the drought.

“The needles are very short and the trees have lost all of their needles up at the top,” said Ward. “The trees are overall brown looking and not the vivid olive color that normally covers the tree. Those are the first trees we have been working on.”