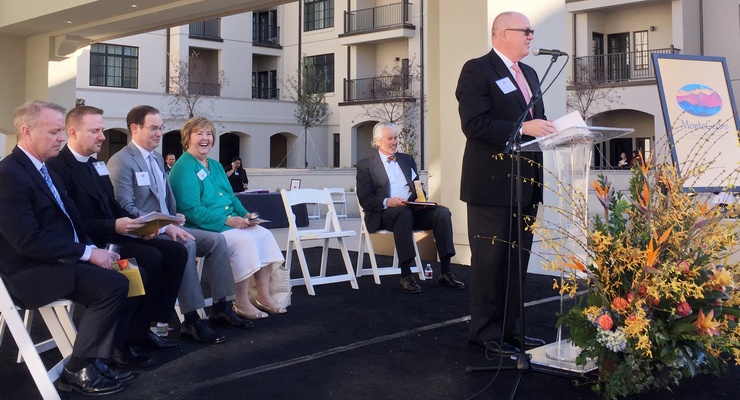 Story and Photography by ANI MIKAELIAN

“We are so excited to be here and to be of service to this community,” MonteCedro’s Executive Director, David Weidert, said. “We are looking forward to being your partner, your patron, your volunteers, and most specially your neighbors.”

Built and operated by Episcopal Communities & Services (ECS), the facility, located at 2212 N. El Molino Avenue, is touted as a “luxury Life Plan Community situated on an idyllic eight-acre site in the foothills of Altadena.”

About 250 people are already signed up into move into the community by the end of 2016, ECS said. Eighty-six of the apartments are already occupied.

The grand opening kicked off with the Jack Lantz Big Band playing a wide collection of classics including “Moon River” and “Orange Colored Sky.”

“This building is much more than concrete and steel,” ECS President and Chief Executive Officer James Rothrock told the gathering. “It’s a testament to leadership and teamwork.”

A number of the new residents stood happily outside of the building to greet visitors.

Chris Wickersham also said he’s happy to be living at MonteCedro. “This is the latest in senior living and has set the benchmark for all other communities.”

Director of Sales and Marketing Sandie Turgeon said, “MonteCedro was a long time coming. It has the best group of people I’ve worked with twelve years in the industry, and they’re all excited about making the move, which isn’t typical in the retirement community. This doesn’t come along very often and we are very proud.”

In addition to the apartments, the complex offers 20 Assisted Living and Memory Support residences, coordinated in-home care, and a number of common activity spaces and landscaped courtyards that take full advantage of the surrounding views.

The community is the first of its kind to be built in Los Angeles County in over 20 years, according to designer Perkins Eastman.