Jaylene Moseley, Local Crusader for Social and Economic Justice, is Dead at 70 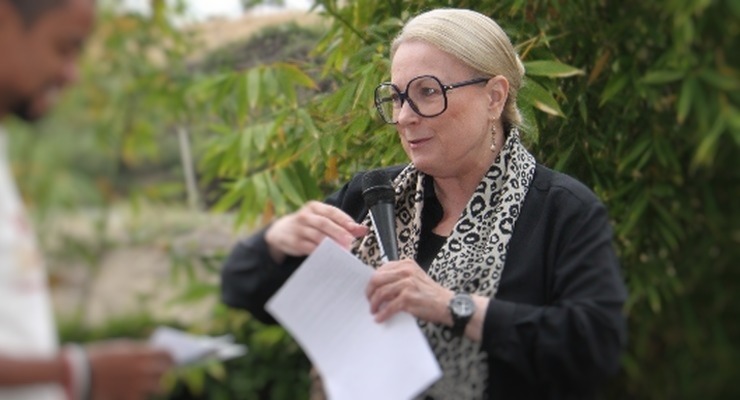 Jaylene Moseley shown honoring a local resident during the 2014 “Walk Northwest” event at the Flintridge Center.

Pasadena awoke Memorial Day to news that respected community member Jaylene Moseley has died from cancer, according to a Pasadena City official.

For three decades, Moseley was a fixture of Pasadena public life. Her work mixed the worlds of business and nonprofit community activism in ways that each supported and strengthened the other in a constructive synergy.

Moseley’s vision led her as a founding member of the Flintridge Center, which was the hub of her professional and philanthropic energies in Northwest Pasadena and Altadena since 1986.

As Flintridge Center President, she convened community stakeholders and facilitated innumerable partnerships and collaborative actions which made an indelible impact on the quality of life for Pasadena-area children, youth and families.

Last Wednesday, the Flintridge Center Board announced in an email to supporters that Moseley had been diagnosed with terminal, stage-four cancer and, as it appeared there was no cure, she was being made as comfortable as possible.

“All of us have been touched in some way by Jaylene’s all-consuming dedication to making our community a place that is free from the cycles of violence and poverty, and it has been our honor and privilege to work beside her, and under her gentle leadership, in trying to make that dream a reality,” the Center said in a statement.

Flintridge’s Board pledged commitment, “to the continuation of the initiatives and programs that Jaylene created.”

Moseley also founded the J.L. Moseley Company, which manages and develops real estate with the stated goal of promoting neighborhood renewal and empowerment. The company’s construction is done with a focus on sustainability and it built the first Gold LEED-Certified structure in Pasadena.

One result of Moseley’s community efforts has been a large number of laurels. Her company received 14 awards for its development projects, while she herself received 23 awards in recognition of her personal contributions to the community, all the while shunning attention and largely flying below the public’s radar.

Said the Congressman at the time: “Without a doubt, Jaylene lives up to her personal creed that in all one’s endeavors, you should be committed to economic and social justice. She sets a tremendous example of what it means to give back to the community.”

At a meeting at Flintridge Center last week on the day after Moseley’s illness was revealed, all present were clearly affected by the news.

“Devastated. Shocked. Feeling a lot of pain,” said Elizabeth Lisa Barrios. “I think we’re shocked because Jaylene is that woman that you just saw her as unstoppable.”

Mo Hyman said, choking back tears, “I imagine, like everybody, we’re all really, really shocked, because we have a collective feeling that Jaylene would be with us forever and would outlive live all of us. And certainly her impact, her spirit, her impact, her work will outlive all of us. So that is comfort, however cold.”

“Jaylene Moseley and the Flintridge Center are at the cornerstone of rebuilding a fractured population of our society,” Perez said.death. “Her selfless efforts have been modeled in several neighboring communities and continue to secure positive results with long lasting partnerships in order for communities to prosper.”

No information about memorial services is yet available.