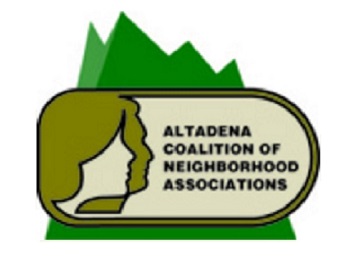 The Altadena Coalition of Neighborhood Associations (ACONA) will discuss the statewide drought, the fire danger level, and traffic, bike and pedestrian safety during its next meeting Tuesday, May 24, at the Altadena Community Center, from 7:00 p.m. to 8:30 p.m.

Daniel Drugan, Water Program Technician at Foothill Municipal Water District, will be speaking about Supplies and Conservation Actions related to the drought.

For the topic on Traffic, Bike and Pedestrian Traffic Safety in Altadena, Captain Steve Strull and Officers Mike Ulloa and Phil Copper from the CHP will be among the speakers.

Captain Vicki Stuckey and Lt. Rob Lewis from the Altadena Sheriff’s Station will also be part of this discussion which will tackle the rules of the road as far as safety is concerned.

Captain Stuckey and Stephanie English, Community Services Liaison at Division III of the Los Angeles County Fire Department will talk about the Fire Danger being early this year. The discussion will include fire laws, fireworks, what should be done to prepare and who to call when problems are apparent. They will also talk about overgrown shrubs and kindling piling up and adding to the danger.

The meeting Tuesday will be at a new location – the Altadena Community Center at 730 E. Altadena Drive in Altadena.

ACONA was established in 2010 to provide a means for Altadena neighborhood associations and Neighborhood Watch groups to network and share ideas and best practices. The group’s meetings are held bimonthly at the Altadena Library, unless otherwise indicated.