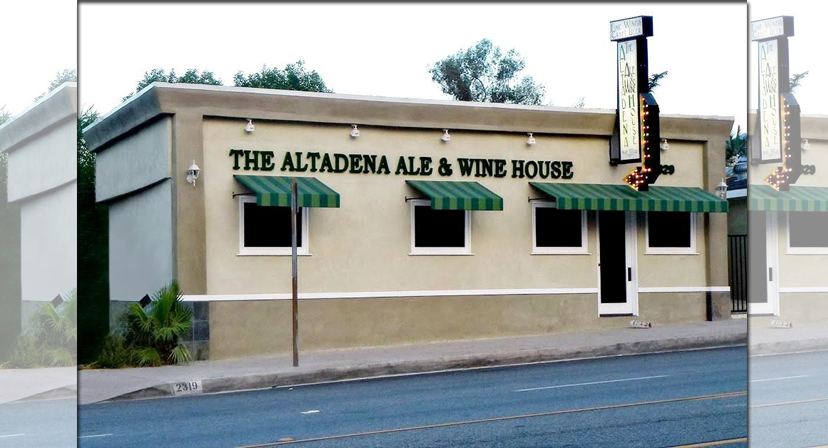 The Altadena Ale and Wine House in Altadena celebrated its seventh anniversary last Monday night, with music and flowing cheer, and conversations with an eclectic mix of people that included artists and musicians, rocket scientists, and movie directors.

They’re actually among the regulars at Altadena’s family-owned little secret hole in the wall, tucked into Altadena’s “Fair Oaks Corridor,” in the shadow of NASA’s Jet Propulsion Laboratory, that head bartender Gareth Casburn, of the sons of owners Gail and Judah Casburn, does not want to call a bar.

In addition to the bar and lounge, Altadena Ale has an outdoor patio on the premises where patrons can drink and smoke, as well as enjoy intellectual conversation.

At any given night, one could see there the very same folks jockeying the Mars Curiosity rover, or fresh from the Marketplace on NPR – “the best place to drink with smart people,” as L.A. Weekly called it a few months back, or as bartender Chloe Hawkins experiences it.

“Just by being a bartender here, I feel totally connected with all aspects of the community, just because there’s so many people that come here from NASA, the Jet Propulsion Laboratory; lots of smart people here, lots of movie people here, so there’s always interesting conversation,” Hawkins says.

The owners say it’s the sense of community and the camaraderie that defines the best traditions of a neighborhood watering hole like what the Altadena Ale and Wine House really is.

It may be a little bit hard to find, but once you come in, you’ll know you’ll be coming back often, says Hawkins.

“You’re going to hear rocket scientists talking to Hollywood directors about big projects and the meaning of life and the philosophy of love and all this weird stuff, over really fine French wines and rare beers that you can’t find in other places,” Hawkins adds.