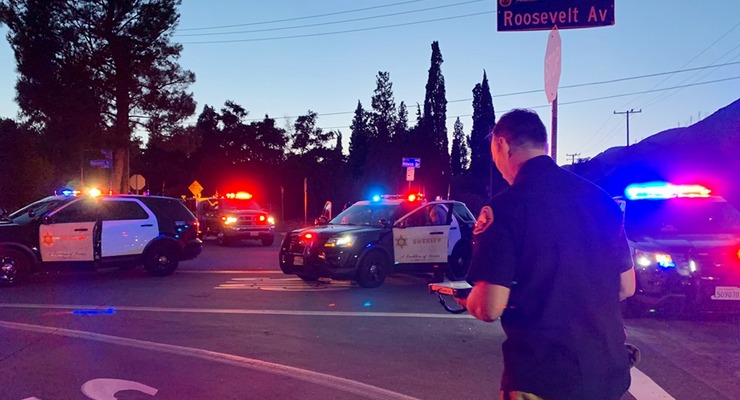 The scene near the traffic island at the intersection of Roosevelt Avenue, Midwick Drive and Altadena Drive shortly after 8 p.m. on Wednesday, May 29, 2019 as first responders arrived to assist a stabbed hiker and arrest a suspect. Image courtesy Los Angeles County Sheriffs Dept.

The man who allegedly jumped out from behind a bush and repeatedly stabbed an Altadena man hiking in Eaton Canyon last Wednesday night pleaded not guilty today to one count each of attempted murder and assault with a deadly weapon.

Los Angeles County District Attorney’s office spokesman Ricardo Santiago said that the suspect, Kristopher Brown, 35, is scheduled to return on June 17 for a preliminary hearing at the Pasadena courthouse in Dept. J.

Brown was arrested by Los Angeles County Sheriff’s Dept. Altadena Station deputies shortly after the deputies were called about 8 p.m. to help the wounded hiker.

The hiker had been attacked on the Henninger hiking trail behind homes near Altadena Drive and Midwick Drive, officials said.

The wounded victim ran towards a nearby home but was pursued and stabbed again by the suspect, deputies said. The victim collapsed in a front yard in the vicinity of Altadena Drive and Roosevelt Avenue.

Arriving deputies located Brown in the immediate area, and he was arrested. The deputies also took custody of a knife thought to be used in the attack.

Brown was transported for medical clearance before for booking.

The victim was transported to a local hospital with multiple stab wounds to the upper torso.

On Friday morning, Paige reported the victim is “doing a lot better” but faces “a long road of recovery.”

Brown was originally referred to authorities as a “transient” because they could not connect him with a home address. They now believe otherwise.

“We have more evidence that our attacker is not homeless,” Paige said.

Brown is being held in the Men’s Central Jail in Los Angeles. At Friday’s hearing, Brown’s bail was raised to $1,050,000.

Anyone with information about this incident is encouraged to contact the Los Angeles County Sheriff’s Department’s Altadena Station at (626) 798-1131. If you prefer to provide information anonymously, you may call “Crime Stoppers” by dialing (800) 222-TIPS (8477), use your smartphone by downloading the “P3 Tips” Mobile APP on Google Play or the Apple App Store or by using the website http://lacrimestoppers.org.