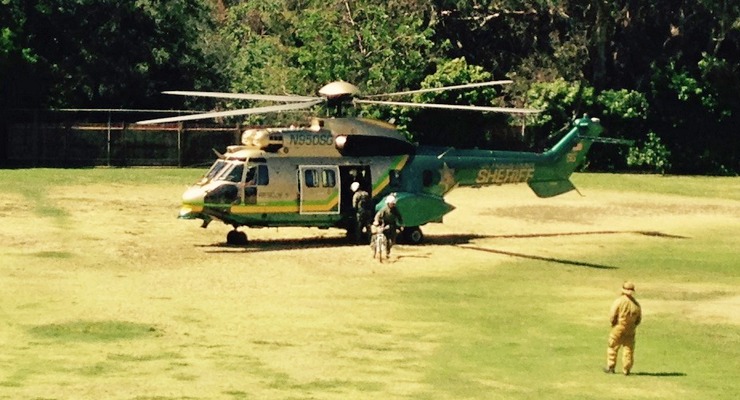 This morning at 10:15 a.m., the Altadena Mountain Rescue Team was requested by Los Angeles County Fire Department, for the rescue of a mountain biker who fell approximately 75 feet off a cliff, on the Sam Merrill Trail, in the Angeles National Forest.

Several bystanders who saw the mountain biker fall were able to use their cell phones to call 911 and request help.  Sheriff’s Air Rescue 5 arrived first on scene, performed a hoist rescue of the victim and his bicycle, and flew the victim to Farnsworth Park.  Firefighters from the U.S. Forest Service and L.A. County Fire Department cleared Farnsworth Park of people for the helicopter to safely land at the park.  As soon as the helicopter lifted off the park patrons returned to the park.

The victim was covered head to toe in brown dust, and once the paramedics started treating him they saw he only had sustained minor cuts and scratches along his arms and legs.

The mountain biker was treated for minor abrasions and released by L.A. County Fire paramedics.  The Altadena Mountain Rescue Team transported the victim and his bicycle back to his vehicle. The mountain biker, male 52 years old, a resident of Pasadena, was thankful for the quick response.