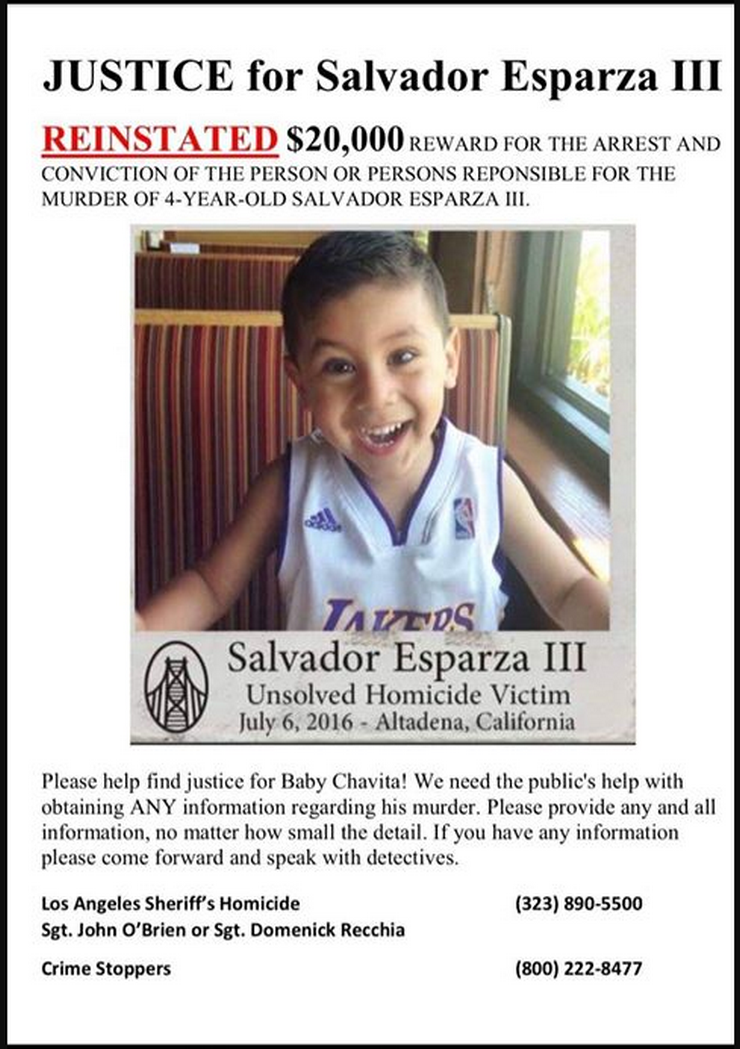 A $20,000 reward has been reinstated for the arrest and conviction of the person who murdered 4-year-old Salvador Esparza III on July 5, 2016.

The Los Angeles Sheriff’s Homicide Bureau is asking for the public’s help with any information regarding the murder of the baby, who was shot and killed in front of the house on the 300 block of West Figueroa Drive in Altadena.

At around 10:30 p.m., the child was with his parents on July 5 visiting a friend’s home on the corner of Olive and Figueroa in Altadena when a suspect fired several rounds in the direction of the house which killed Esparza and injured a 27-year-old black male, an LA County Sheriff’s Dept. press release read.

Detectives said the shooter was a suspected gang member who chased a 27-year-old man onto the property, shooting 13 rounds and hitting the man and Salvador. The child was struck in the head by a bullet and was killed and the man lived.

“We don’t have much of a description right now. That night, there were quite a few people on the street so we were told that a few people saw what happened, just no one has come forward to help identify that individual,” explained L.A. County Sheriff’s Dept. Homicide Detective Lt. John Corina at the time.

The parents of the deceased child are from Monrovia and were visiting friends. They were not the targets. It had been believed a suspect got into an argument with the live-in boyfriend of the boy’s mother up to two hours prior to the shooting. It is believed the boyfriend or his brother were the shooter’s desired targets.

“If anybody knows any information regarding this, please, please, don’t be scared to talk. Please talk to detectives. Talk to somebody about it. I really want justice for my son,” mother Coral Esparza said.

The unknown shooter fled the scene initially on foot and got into a black vehicle heading southbound on Olive Avenue. The suspect is a black male.

The reward had expired in October, 2016 but will be available for 90 days. is being offered by the LA County Board of Supervisors to catch the killer. No information is too small and may help in the investigation.