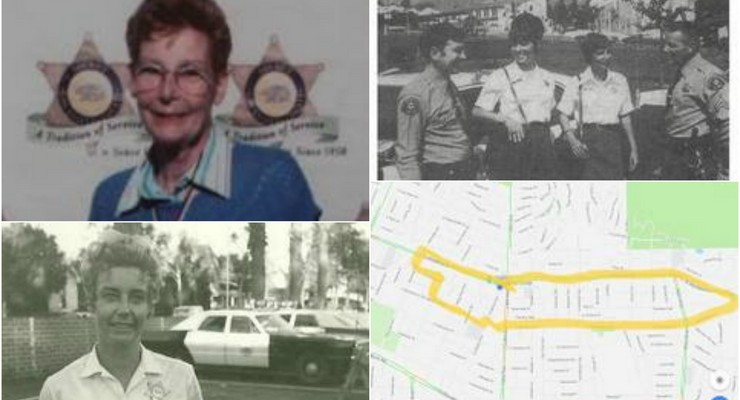 On January 3, 2010, retired Deputy Sheriff Charlene “Charlie” Rottler, Los Angeles County Sheriff’s Department, died from injuries she sustained while working on patrol at the Altadena Sheriff’s Station. Most people are unfamiliar with Charlie’s story. She and her training officer were involved in a traffic collision with a drunk driver on November 5, 1972, nearly 40 years prior to her death last January. That she did not die that day or in the months that followed is nothing short of a miracle. That she survived as long as she did was a testimony to her indomitable spirit.

Charlie’s becoming a deputy sheriff at all was a bit of an accident. Her husband was the one who wanted to be the deputy. He took the written exam twice, failing it both times, so Charlie decided to take the exam to help him out — it was her plan to help him pass on his third attempt. The problem arose when she passed on the first try and the test administrators called to schedule her for an oral interview that afternoon. She got on the phone and asked her husband what to do; they decided she should go for it.

Charlie excelled in the academy; Sheriff Lee Baca, then a deputy, was one of her drill instructors. She graduated from Academy Class 129 in June 1969, just ahead of her husband, (another Charlie, who finally did pass the written exam.)

After graduation, Charlie was assigned to San Dimas Station and handled citizen complaints and other support functions. Women were assigned to patrol stations beginning in the 1940’s, but most never got any closer to a patrol car than the front desk. But not Charlie. She managed to find male deputies who she could ride with in an “unofficial” capacity. Charlie broke into the boy’s club in another way as well. Shortly after graduation, she became the only female member of the Sheriff’s shotgun team. There was no Department mandate to include women; she won her way onto the team by merit.

It was hardly surprising that Charlie volunteered to be a full-fledged patrol deputy when that opportunity was first offered to women in the summer of 1972. Twenty women volunteered and were chosen for this trial program. A patrol school was created to prepare these women for working in a radio car, as the department had no patrol school prior to this time.

Charlene and the rest of her female partners graduated on August 31, 1972 and she was assigned to Altadena Station the next day. During the graduation ceremony, they stood for inspection for Sheriff Peter Pitchess wearing skirts and white blouses and carrying their guns in a purse. This was to be their regular uniform while performing patrol duties with their male partners.

Just two months later, on November 5, 1972, her daughter’s eighth birthday, at approximately 1:00 A.M., Deputy Sheriff Trainee Charlene “Charlie” Rottler and her partner Doug Oberholtzer were traveling down Altadena Drive responding to a battery call. Deputy Oberholtzer was driving, riding in the backseat was Bonnie Clary; a newspaper reporter working on a story on the first women deputies working uniformed patrol.

As the patrol car approached an intersection just west of Altadena Station, a drunk driver ran a stop sign and the radio car broadsided the vehicle. A passenger in that car was killed and two other passengers were injured. Reporter Bonnie Clary suffered a broken leg and Doug Oberholtzer broke a bone on his hand. Typically, only the drunk driver was uninjured.

“My mom’s left lower extremity was the only part of her body that was not injured. Her skull and face were completely crushed. A plastic surgeon did an extraordinary job [repairing the damage] for 1972. … I was told she had over 350 stitches to her face alone. Her seat came off the car and she bounced all around. Her internal organs were all ruptured but the main damage was to her intestines. The doctors said if she made it through the surgeries she would die from the infection that would occur from the ruptured organs. Her back was broken in many places and it was thought her spinal cord was severed. Her heart was not affected but everything else was.”

Initially, the responding firemen thought Charlie was dead. When they realized their mistake, they rushed her to Huntington Memorial Hospital. She endured over 20 hours of surgery on that first day and was in a coma for the next month. The doctors told her family not to expect her to awaken from it. She was monitored around the clock by Huntington Hospital candy stripers.

When Charlie finally did wake up she saw one solitary candy striper sitting in a chair by her bed trying to read under the light of a weak lamp. Charlie’s first waking words were to suggest to the girl that she needed better light. After the young woman recovered from the shock of hearing Charlie speak, she ran out of the room to get help. This was only the beginning of Charlie’s ordeal. Sadly, Charlie’s injuries compelled her to retire from the Sheriff’s Department in April 1974. She endured 55 major surgeries over the rest of her life trying to repair the injuries she sustained in that traffic accident in 1972. When she finally succumbed to them in January of 2010, her body had so deteriorated that she had been compelled for some time to attach herself to a feeding tube each night to ensure she received enough nutrition. Other people might have had an in-home nurse perform this task, but Charlie had enough moxie to do it herself.

Charlene Rottler did not know the meaning of the word quit and she never felt sorry for herself. She continued to fight and to be an inspiration for her family and friends. In 1996, the Sheriff’s Museum dedicated a display in honor of Charlie and her partners who led the way for women to patrol in 1972. Charlie was quite proud that she was still able to fit into the skirt and blouse the ladies were compelled to wear back in the day and she modeled it with pride
for the cameras.

This Monday December 4th at 7:00am the upcoming LASD recruit class will be running along Altadena Drive in Mariposa Street in honor of our fallen Deputy.