Have You Seen This Man? Authorities Need Help to Catch This Alleged Kidnapper 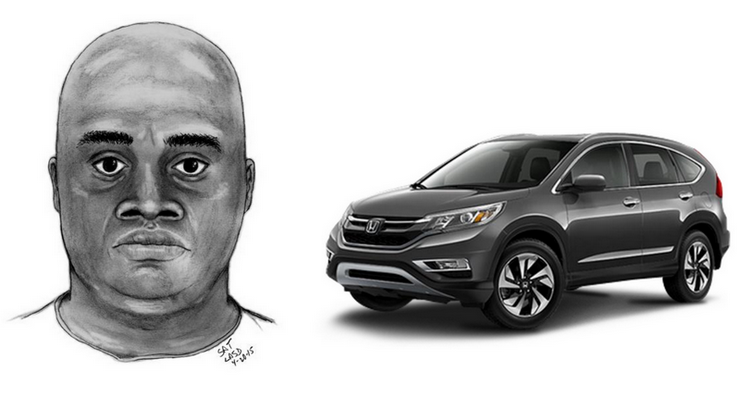 A recent attempted kidnapping of a 22-year-old woman in a residential neighborhood in Pasadena has set off an area-wide search for the suspect, and now local authorities are asking the public’s help.

On Friday, April 17, 2015 at about 10:00 p.m., the suspect drove alongside the victim near the intersection of Marengo Avenue and Tremont Street and tried to engage her in conversation. When the victim ignored him, the suspect exited his vehicle, chased after the woman and struck her. He then forced her into his vehicle but the victim was able to fight off the suspect, get out of the vehicle and run for help.

The suspect is described as a Black male, mid to late 30s, dark complexion, 5’10”, 200 pounds, heavy build, with a shaved “shiny” head, round face with bushy eyebrows, and wearing a white t-shirt and dark blue jeans. See composite drawing depicted above.

The suspect’s vehicle is described as a gray, newer-model Honda CR-V or similar type SUV. See similar photo depicted above.

To receive real-time public safety alert from police and fire departments, register at Nixle.com or text your zip-code to 888777.