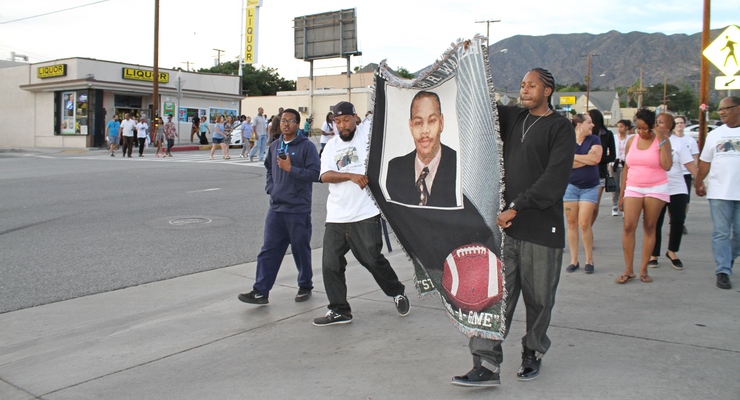 The parents and sisters of a slain local young black man led about 100 marchers down Fairs Oaks Avenue Thursday evening to the spot where six months ago he was shot, and there speaker after speaker urged the Altadena/Pasadena community to stand up to gang violence.

Altadena-bred Christopher Walker, 26, was targeted as he sat on the patio at Fair Oaks Burgers on Fair Oaks Avenue about 4:30 in the afternoon of Oct. 30 , 2014. The shooter got out of a car, fired multiple times at him, then climbed back into the car and sped off.

A Los Angeles Sheriff’s Department spokesperson said Thursday no arrests have been made but the case remains an active investigation.

Walker’s murder is bitterly poignant to some because he was not a typical gang-banger. He was a private school student (Pasadena Christian). He grew up in a stable, All-American household. He attended church.

But the attraction of the local gang life pulled in Walker. He was recruited to be a Crip gang member when he was only five years old, via Pasadena Little League Baseball.

When his mother, Ursula Walker, discovered her son was a gang member at 11, her reaction was disbelief and ignor

“There are gangs in Altadena and Pasadena?” she asked. She had no idea there were.

“The Crips’ influence on Christopher was stronger than his parents’ and he remained gang-affiliated until he was a young man. But then, over the course of several years, he turned his life around,” said Rev. Petrie. “He had a steady job and he carpooled with his mother early every weekday morning as they worked only blocks apart in Los Angeles. On the day he was killed, he was simply waiting for a burger with some old friends, about to pick up his daughter at preschool, when he was shot from behind. He never saw his assailant.”

Walker’s parents spoke a relative read an essay Walker had written describing his life and how the lure of gangs had ruined it.

Mikala Rahn, the Founder and Director of Learning Works Charter School is a confirmed speaker (she has been called the Father Gregory Boyle of Pasadena).

Ricky Pickens spoke, a local gang intervention leader and Director of Youth of Promise, which provides services and programs curbing gang affiliation in Pasadena over the past fifteen years.

The march formed in front of Walker’s church, Altadena’s Church of the Nazarene, and streamed down the short distance to the Fair Oaks Burger, where a stage was set up.