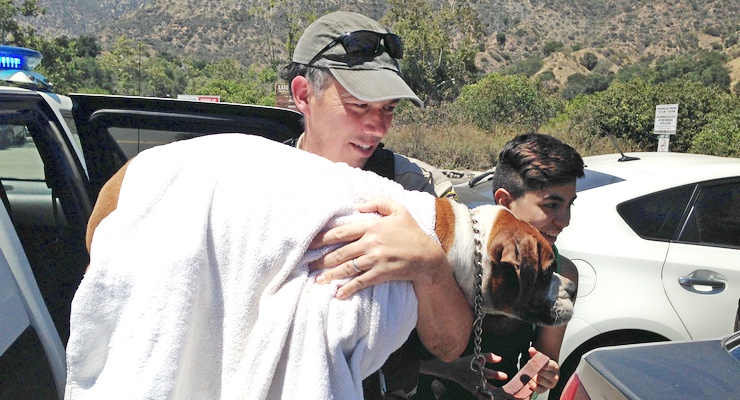 Monday at 1:00 pm, a call came into the Altadena Sheriff’s Station for a dog that had collapsed from possible heat stroke.

The hiker, a 20-year-old female from Downey, Calif. was hiking in the Eaton Canyon Nature Center with her dog, when the dog appeared lethargic and stopped walking. The hiker called for help.

Along with Pasadena Fire Department, the Los Angeles County Fire Department, and Altadena Search and Rescue Team responded to Eaton Canyon. Fire Captain Joe Grayston of L.A. County Fire Engine 66 was able to telephone the hiker and direct rescue crews into the location of the injured dog.

The Altadena Mountain Rescue Team was able to drive up the dirt hiking trail and reach the hiker and her dog. The first arriving rescue crew saw “Tyson.” a 4 year old Boxer dog unable to sit up and quickly panting.

An attempt was made to give the overheated dog water, but sadly Tyson threw up every time water was given. Tyson was loaded into the air conditioned cab of a waiting Altadena Rescue Team truck, and both Tyson and owner were driven off the hot trail to the parking lot at Eaton Canyon Nature Center.

The Pasadena Humane Society was waiting at the nature center parking lot, and they accessed the dog.

After 30 minutes of cooling off, Tyson was given water, and did not throw up. It was believed Tyson was now well enough to travel home with his owner, who was very concerned for her dog.

The Altadena Mountain Rescue Team is made up of all volunteer reserve deputies and civilian volunteers, for more information visit http://www.AMRT.org