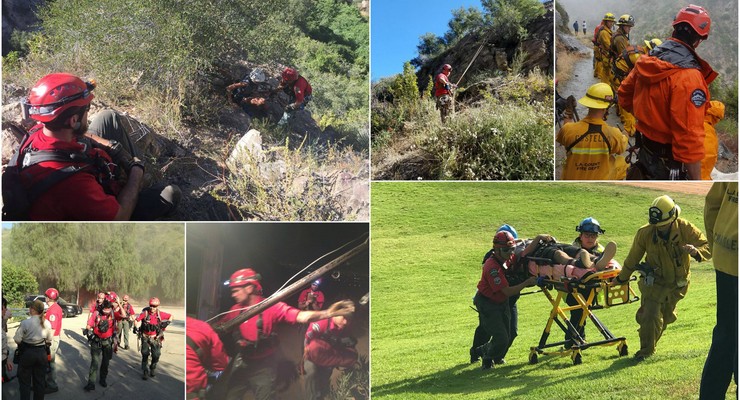 The spider-men of Altadena’s Mountain Rescue Team will take a much needed break from death-defying missions saving the lives of hikers trapped on crumbling perches or those injured in the depths of uncharted canyons to share stories of their daring efforts at a special presentation Monday hosted by the Altadena Historical Society.

Headquartered at the Altadena Sheriff’s station off North Lake Avenue near the base of the San Gabriel Mountains, the rescue team has been staffed by selfless citizen volunteers since 1951. It is a vital chain in a network of eight Sheriff’s Department rescue teams in Los Angeles County that is operational 24 hours a day, 365 days a year. It is also the oldest organization of its kind in Los Angeles County.

Altadena’s Rescue Team is the de facto lifeline for distressed hikers that fall prey to the dangers of the beguiling mountains rising north of town, which often lure the unfit and ill-prepared.

Members of the Rescue crew and the Altadena Historical Society will present fascinating archives that illustrates the some of the dramatic rescues that have occurred over the years at a public gathering Monday night at the Altadena Community Center.

“It takes commitment to be on this team, first and foremost,” explained Los Angeles County Sheriff’s Deputy and Altadena Mountain Rescue Team member Dan Paige. “This is a full-time hobby where you have to integrate everything towards mountain rescue. Human lives are at stake and our job is to get them home safe.”

The team conducts weekend patrols of the mountain areas within its jurisdiction, namely the 20 canyons north of Altadena and Pasadena.

These patrols ensure a quick response to emergencies during a time when they are most likely to occur, and serve as a means of fire prevention and mountain safety, according to the Team’s website.

“Most lost hikers tend to leave clues of similar patterns where we are able to find them within a few hours, but other times we have the work cut out for us,” explained Paige.

Eaton Canyon is a high activity area where hikers frequently become lost or injured. It accounted for seven searches and 30 rescues in 2016.

A memorable rescue Paige recalls was when a group of 15 hikers disappeared in the hills above Eaton Canyon in 2014.

The hikers were forced to camp with bare essentials in the wilderness overnight until the rescue team located them after hours of searching. The Team’s efforts began in total darkness at 10 p.m. after concerned family members called to report their loved ones had not returned home from a day hike.

The Team had to resort to heading through the wilderness on foot since the weather would not permit helicopters to fly at that time.

“We had people hiking all night long throughout the canyons in wetsuits,” Paige said, explaining the Team members had to scale past chilly waterfalls in the cold night to reach higher elevation areas where the hikers were eventually located.

“We find most hikers within six hours,” explained Paige. “They were gone for around 17 hours,” Paige added.

The morning sun came out and the rescue team was able to deploy a helicopter to be an extra eye in the sky. Soon after liftoff, the helicopter crew spotted stranded hikers spread out across a half mile stretch.

The hikers were hoisted up to the rescue helicopter one by one and flown to safety.

One essential contraption is called a litter wheel, a kind of mix between a wheelbarrow and a medical gurney that is equipped with a large center wheel that makes it easy for crew members to push on difficult surfaces like sand.

“A lot of the trails we have you can only hike in and hike out. It’s way too narrow for a vehicle, too steep for a horse and mountain bikes are not practical for our use. It’s common for us to find a person and move them either up the canyon or down the canyon,” explained Paige.

The Team is one of the only rescue teams in L.A. County that is able to transport majority of necessary rescue gear on the backs of crew members.

“Our team prides itself on the fact that we can carry almost all the gear on our back and then hike into the mountains and have everything we need at night, medical equipment, food, all of those things,” explained Paige.

Another piece of equipment that is unique to the rescue team is a gasoline powered cylinder called the backpack wrench, which is a compact pole-like device that can pull rescuers up cliffs by rope.

The wrench was originally created to pull fallen trees out of forests.

“It’s an incredibly simple device, but we’ve modified it a bit so we can use it for rescues,” explained Paige who mentioned that its power is equivalent to about fifteen men pulling someone up by rope.

But unquestionably the most impressive asset the team has are its dedicated volunteers who spend years training and are available around the clock to spring into action.

“We are unique in L.A. County in that almost all of the staff are volunteers,” Paige said.

The average time rquired to become a team member from submitting an application to going on rescue missions is about five years, according to Paige.

“If you don’t practice it you lose it incredibly quickly. You have to really have a life long commitment,” explained Paige.

Dramatic rescues of lost and injured hikers in the San Gabriel Mountains by Altadena’s renowned Mountain Rescue Team will be featured in a program Monday night sponsored by the Altadena Historical Society.

The program, presented by Los Angeles Sheriff’s Dep. Dan Paige and Altadena Historical Socoety member William Dawson, will be free and open to the public at the Altadena Community Center located at 730 E Altadena Dr. and will begin at 7:30 p.m.

The talk will be illustrated with both still photos and video, and rescue equipment will be on display as well as the team’s equipment truck.

To support the Team, visit this GoFundMe page: https://www.gofundme.com/altadenamrt