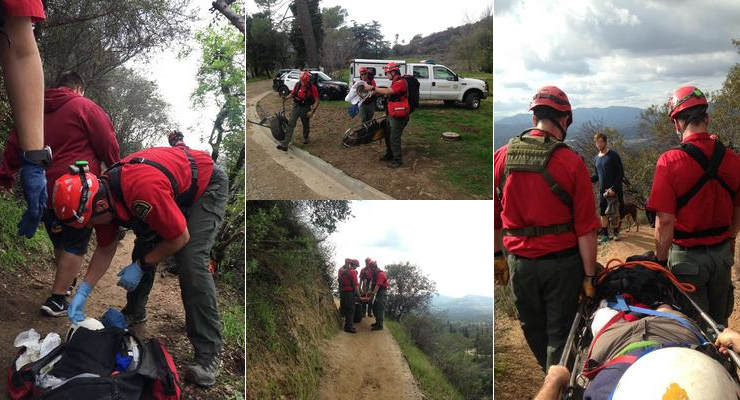 Two members of the Altadena Mountain Rescue Team (AMRT) were attacked by a dog whose owner the rescue team was trying to help after getting injured while hiking on the Sam Merrill Trail in the Angeles National Forest Saturday.

The first rescuer luckily had thick gloves on when the dog, a six-year-old Jindo, bit him on the right wrist so the bite did not injure him. The second team member wasn’t as lucky – the dog bit him in the right shoulder, breaking the skin.

Team members said the dog must have been trying to protect its owner, a 62-year-old Pasadena man who was injured when he stepped on uneven ground during the hike.

A post on the Altadena Sheriff’s Station’s Facebook page said the AMRT, composed mostly of Los Angeles Sheriff’s Department reserve deputies, was called for the rescue at about 12:13 p.m.

The rescue crew located the hiker on the Sam Merrill Trail about 1.5 mile north of Lake Avenue and Loma Alta Drive in Altadena, the post said.

As rescue crews began treating the hiker, his dog, Rex, bit one of the rescuers on the right wrist. Then the dog attacked the second team member who suffered a gash in the shoulder. Another team member was able to pull the dog away with its leash and prevented it from attacking other people.

The team was able to perform first aid on the injured hiker, placing the hiker’s left leg in a splint, and then loaded him onto a litter.

While carrying the injured off the narrow trail, another AMRT member injured his left ankle, although he was able to walk down the mountain

A member of the hiker’s family met the team at trailhead and drove the hiker to a hospital.

Before the team pulled out, personnel from the Pasadena Humane Society arrived at the trailhead to document the dog bite. The man bitten in the shoulder was treated and released on light duty.

Meanwhile, the member who injured his ankle will seek treatment at a later time.