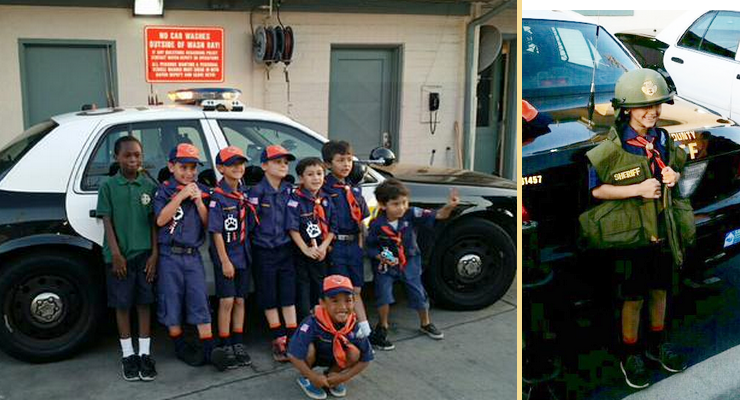 Between the reports of “shots fired” or “hiker trapped on canyon cliff,” the deputies of the Altadena Sheriff’s station have time for reaching out to the younger generation to introduce them to the human side of law enforcement and its rewards.

“They got to see the station jail and emergency response equipment. We took them through dispatch. They got to sit in and see how our dispatchers were able to handle emergency calls,” said Deputy Dan Paige.

A big reason behind the tour is give these younger members of society a positive outlook towards law enforcement.

“We want to gain rapport with them, to show them we are compassionate,” Paige said.

Among his duties at the Altadena Station, Paige is involved with L.A. County Sheriff’s Explorer Post 7.

When the Cub Scouts who toured the Station yesterday grow up a bit, they can be eligible to become an Explorer.

“We have an Explorer program at the Altadena Station where we show the kids just about every aspect of our job,” Paige said. “They go through a ‘mini-academy’ where they pretty much mirror the training that regular deputies get. They also get to ride along with the deputies.”

Paige said a number of men and women employed by the Los Angeles County Sheriff’s Department today were Explorers when younger — including himself and Altadena Station Captain Christopher Reed.

The program is open to youngsters aged 14 to 20.