Another Day, Another Rescue, But This Time with a Side of Tacos 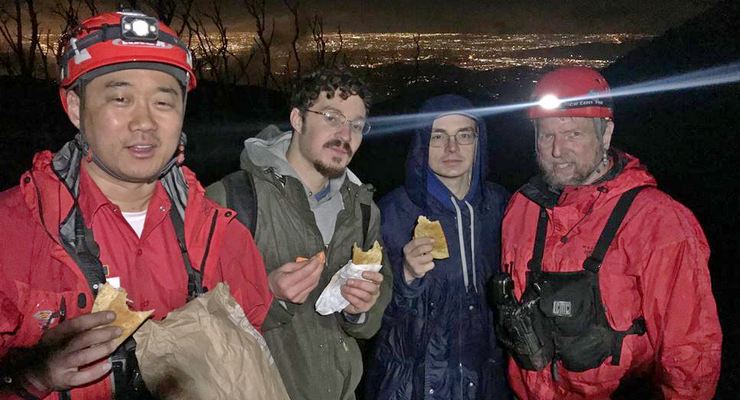 Altadena Mountain Rescue Team was called for the search of two hikers lost in the area of Fern Canyon and Brown Mountain, in the Angeles National Forest Friday night at approximately 5:00 p.m.

Altadena rescue units had text communication with the hikers, who were not on a marked trail, but were able to send their location to the rescue team by using their cell phone locator. The hikers were just southwest of Brown Mountain above Altadena.

After braving the rain, at around 9 p.m., rescue team members could hear the hikers yelling, but due to the thick clouds, the lost hikers could not be seen. Finally there was a break in cloud cover and a Los Angeles County Fire Department helicopter was requested to help search the area for the hikers.

Just as rescue members on the ground got close to the hikers, the clouds returned and the helicopter was canceled.

Altadena Mountain Rescuers on the ground were able to locate and contact the hikers. It was determined they were uninjured and able to hike out on their own with rescuers for 2 miles, to reach the Mt. Lowe Truck Trail.

Volunteer rescue members had just finished their day jobs when this call came out. They raced up to search for the lost hikers. The next crew members saw their partners had a 5 mile hike and the potential for a long night ahead, so they decided to pick up dollar tacos at a drive thru. Rescuers and hikers were able to share a couple of tacos for dinner before heading out.

Pictured are Altadena Mountain Rescue Team members Ernest Park and Wally Stephen with the hikers enjoying a well deserved taco dinner. Rescuer team members arrived back at the station at around 1:30 a.m.