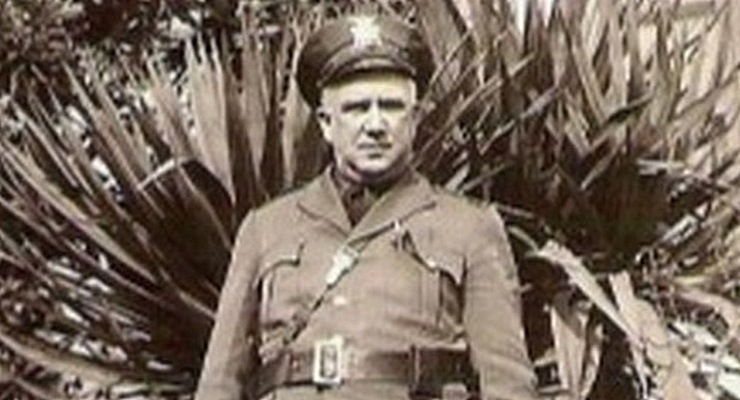 The weather on Christmas Eve 1941 reflected the mood of the people in Los Angeles County. It was dreary, dark and filled with uncertainty. Less than three weeks before, the Japanese Imperial Navy smashed the U.S. Pacific fleet at Pearl Harbor. Now, even sharing the daily weather forecast with the public was prohibited by a nervous War Department that feared that the enemy might use this knowledge to launch an attack against the West Coast. Cars moved slowly through the early evening darkness made more extreme by newly-imposed wartime blackout laws. Even Altadena’s famous Christmas Tree Lane was ordered into darkness for the first time in twenty-one years.

On this most uncertain of all Christmas Eves, when the promise of peace on earth and goodwill to men never seemed more remote, Altadena Deputy David Stout Larimer and his longtime partner Benjamin Davis were patrolling on Colorado Boulevard just west of Rosemead Boulevard. This area is patrolled by Temple Station today, but with far fewer stations in 1941 the geographic responsibilities of each station were far different than they are now.

At Colorado Boulevard and Lotus Avenue the two deputies saw a woman in need of assistance. The inclement weather and blacked out streets made crossing this intersection a challenge and the two deputies stopped to help. Deputy Larimer exited the squad car and contacted Mrs. John Girvan while his partner remained in the dry vehicle. Mrs. Girvan’s predicament was obvious and Deputy Larimer attempted to escort her across the dark street with the aid of his flashlight.

Larimer’s sacrifice
Unfortunately, the blacked out streets and poor weather were not the only thing inhibiting the driving ability of Frank Usrey, 41, of East Pasadena. He also had imbibed a little extra holiday cheer before getting behind the wheel. Deputy Larimer saw Usrey’s vehicle approaching and realized what was about to happen. He pushed Mrs. Girvan to safety, but was struck by Usrey’s car and thrown at least twenty-one feet and killed instantly.

The Japanese bombing of Pearl Harbor took 2,402 lives and wounded 1,282 others, but it is unknown just how many traffic related fatalities occurred as a result of the wartime blackouts imposed in the wake of the attack. Deputy Larimer was one of eight people who lost their lives in traffic collisions on Christmas Eve 1941. There seems little doubt that the blackout was at least partly responsible.

The loss of Deputy Larimer was a tremendous blow to the Los Angeles Sheriff’s Department and Altadena Station. He was very popular and was well known to both Sheriff Eugene Biscailuz and Undersheriff Arthur Jewell. Larimer and Jewell joined the Department together in 1910 just three years after Biscailuz.

David Stout Larimer was born in Shawnee County, Kansas in 1876. He moved to Los Angeles in 1901 and worked for the Fred Harvey system. This company was affiliated with the Santa Fe Railroad and its restaurants and hotels were located along the Santa Fe’s route. Fred Harvey began his company in Kansas so David Larimer’s association with the firm may have begun before his arrival in Los Angeles. In 1906, Larimer was a candidate for precinct 40 during the Republican Party county caucus elections. Coincidentally, Eugene Biscailuz was a candidate that year in precinct 135. Later that year William “Billy” Hammel would be reelected as Sheriff and he would ultimately hire both Biscailuz and Larimer as deputies.

A career damaged
Larimer, like Eugene Biscailuz and Arthur Jewell, rose quickly in position and authority within the Sheriff’s Department. Sheriff John Cline appointed Larimer superintendent of county constables in 1915. Later he was also given the added responsibility as chief of prisoner transportation. It was because of his position in this latter capacity that his LASD career took a serious blow.

On November 8, 1923, a county grand jury returned two indictments against Larimer. The first indictment charged him with eight counts of embezzlement and the second with one count of forgery. These charges stemmed from transportation fees Larimer allegedly pocketed when escorting convicted felons to San Quentin and Folsom prisons. Another deputy, Gilbert H. Blasdel, was also indicted by the grand jury on six counts of embezzlement at the same time.

Larimer immediately sent a letter to Sheriff William Traeger requesting a leave of absence from the department to fight the charges leveled against him. Blasdel and Larimer were tried separately. In January of 1924, a jury acquitted Blasdell on all charges after just thirteen minutes of deliberation. All charges were dismissed against Larimer in June of 1924 when it was shown that the money he was alleged to have embezzled was in fact used appropriately. But the damage to Larimer’s career because of these allegations was done.

Even though he was cleared of the charges Larimer did not immediately return to the Sheriff’s Department. It is unknown what jobs he held between 1924 and 1929, but the newly established California Highway Patrol was formed in 1929 and he went to work for them. Here Larimer renewed his friendship with Eugene Biscailuz who was the Highway Patrol’s first commissioner. Prior to rejoining the Sheriff’s Department as a deputy in November 1931, Larimer also worked for the State Board of Equalization. In 1932, Larimer was assigned to Altadena Station. Larimer was a longtime resident of Altadena. His home at 227 W. Palm Drive is still there and was located little more than a mile from the station.

An ironic death
Though Larimer worked patrol duties, one of his primary responsibilities was as a traffic accident investigator. The practice of all traffic collisions in county areas being handled by the CHP was still far in the future. By 1941 he and his partner Ben Davis were the chief investigators for Altadena traffic collisions which made his death from injuries sustained during a traffic accident cruelly ironic.
David Larimer was buried at Mountain View Cemetery in Altadena on December 29, 1941.

Sheriff Biscailuz and Undersheriff Jewell attended the funeral and the eulogy was delivered by Sheriff’s Chaplain Deputy Ed Green who noted that, “True to the tradition of an officer and a gentleman, always looking to serve, he was intent once more in helping and protecting a fellow human being. We think that this was the way Dave would have wanted to go—to go out in the line of duty.”

David Larimer’s wife, Lotta, died the year before her husband, but he was survived by his son David Larimer, an attorney, his daughter Elisabeth Burwell, and four grandchildren. One of those grandchildren was a lanky fifteen-year-old who also bore his grandfather’s first name and still remembers shaking Sheriff Biscailuz’s hand at the funeral.

The driver acquitted; a legacy formed
There are two parts to the story of Deputy Larimer’s death. The first part came to an end on April 21, 1942 when a jury in Judge Frank C. Collier’s court in Pasadena found Franklin S. Usrey not guilty of drunk driving and negligent homicide. According to an account handed down to surviving members of Larimer’s family, Deputy Larimer’s son David may have even assisted in Usrey’s defense. Whether this is true or not, it is possible that the weather and blackout conditions may have been seen by the jury as mitigating factors in the tragedy which contributed to their verdict.

The second part of Deputy Larimer’s story began over fifty years later and almost four hundred miles to the east in Yavapai County, Arizona. One day a reserve deputy sheriff was sharing with his Sheriff the reason why, after a successful career as an engineer and now in the midst of a well deserved retirement, he felt it was his duty to serve in law enforcement. He told the Sheriff how his grandfather had been struck and killed by a drunk driver while working as a Los Angeles County deputy sheriff in 1941. The Sheriff checked to see whether his reserve’s grandfather had ever been honored for his sacrifice by being added to the national peace officer’s memorial. When he learned that he hadn’t, he encouraged Reserve Deputy David Burwell to contact the LASD. With the assistance of Yavapai County Sheriff G.C. “Buck” Buchanan, Deputy Sheriff Burwell wrote a letter to our Department and in 1996 and David Larimer was added to both the county and national memorials.

As it turned out, the department made a fortuitous omission. Deputy Larimer’s name was not also submitted at the time for inclusion on the state memorial in Sacramento. In 2007, Deputy Larimer’s absence from this memorial was noted and the process began to have him added. He was scheduled to receive his honor at the 2009 ceremony. At these events, surviving family members are acknowledged and they place a rose on the memorial on behalf of their departed loved one.

A legacy forms a friendship
I was in possession of newspaper articles on Deputy Larimer’s death and it contained the names of his surviving grandchildren. Thanks to the Internet, I was able to locate David Burwell in December 2008. By then he had moved to San Diego County. I told him about the May 2009 ceremony in Sacramento and also that Altadena Station planned to remember his grandfather’s sacrifice with a little informal ceremony on Christmas Eve. David insisted on coming up to the station to join us and so began a wonderful friendship between David and his wife Dolores Burwell and the men and women at Altadena Station.

Deputies
Since 2008, Altadena deputies have worn Class A shirts with ties on Christmas Eve honoring Larimer’s sacrifice. In 2009, deputies lampooned the incorrect photo that was mistakenly posted for years on the National Memorial Website as being David Larimer.

The Burwells are now part of our family and David has given us many articles and photographs of his grandfather. We were especially pleased to receive the photographs because for years the national peace officer memorial website had the incorrect photograph of him posted.

Altadena deputies have honored Deputy Larimer’s sacrifice every Christmas Eve since 2008 by wearing long sleeve class A uniforms with ties. In 2009, deputies lampooned the incorrect photo that hung on our station hallway before we received the right one from David.

On Christmas Eve 2010, David and Dolores visited the station and took a pilgrimage with us to his grandfather’s grave. And in 2011 we renewed our acquaintance with him at the county memorial ceremony where Altadena Deputy Charlene Rottler was added. Last summer David also gave us his endorsement to add a Sheriff’s star to his grandfather’s headstone. In early 2012, we dedicated a memorial honoring both Deputy Larimer and Deputy Rottler and David Burwell.

The loss of any deputy sheriff in the line of duty is a tragedy that should always be remembered. Even seventy years after his death, Altadena Station still remembers Deputy David Larimer. We do so not just because of what he sacrificed on our behalf, but also because of the life he led and the example he set for us to follow.

Badge 510
The mosaic on the floor of the Altadena Sheriff’s Station is a tribute to David Larimer, Badge 510, the first Altadena officer to die on duty.