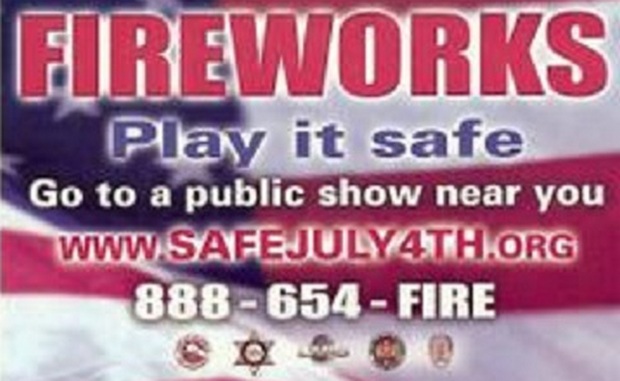 The Altadena Sheriff’s Station reminds all residents and visitors that the best way to celebrate the Fourth of July holiday with family and friends is by attending professional fireworks shows such as the fireworks celebration at the Altadena Town & Country Club, 2290 Country Club Dr., Altadena on Wednesday, July 1st.

On July 4th, Americafest at the Rose Bowl Stadium will be a safe venue to watch one of the largest fireworks shows in all of Southern California.

The sale or possession of all fireworks is illegal in Altadena. Violators are subject to confiscation and impound of vehicles; up to one year in jail and fines up to $50,000.

The Los Angeles County Fire Department wants to remind everyone that the use of fireworks not only causes fires, but results in severe injuries and burns.

Even sparklers, which many people consider safe, can reach 1,200 degrees Fahrenheit, causing serious burns and starting fires. Adults normally don’t allow their children to get near anything that hot, but for some reason they think it’s acceptable to put sparklers in the hands of little ones on the Fourth of July.

Statistics show fireworks are among the most risky of consumer products. In 2012, U.S. hospital emergency rooms treated an estimated 8,700 people for fireworks related injuries; 55% of 2012 emergency room fireworks-related injuries were to the extremities and 31% were to the head. The most current statistics from the National Fire Protection Association show that in 2009 more than nine out of 10, or 92 percent, of all fireworks-related injuries treated in hospitals were caused by fireworks that are allowed for consumer use by federal or state regulations.

NOTE TO PARENTS: If your child has any fireworks prior to June 28th, the items are probably illegal and dangerous and should be
turned over to your fire department or local police agency!

Parents are liable for any damage or injuries caused by their children using fireworks.

For more information visit the web site of the Los Angeles County Fire Department at http://www.fire.lacounty.gov

Partner to prevent or report crime by contacting your local Sheriff’s station. Or if you wish to remain Anonymous, call “LA Crime Stoppers” by dialing 800-222-TIPS (8477), texting the letters TIPLA plus your tip to CRIMES (274637), or using the website http://lacrimestoppers.org/