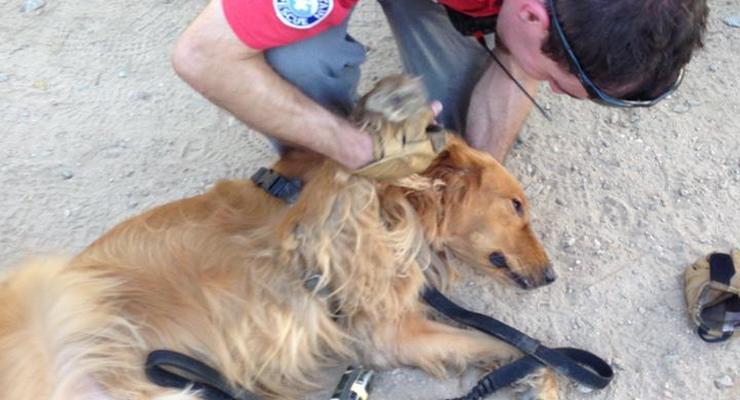 Members of the Altadena Mountain Rescue Team rescued two dogs suffering from heat exhaustion as they were hiking with their owners on the Sam Merrill Trail in the Angeles National Forest Saturday. One of the owners also fell ill because of the heat and had to be given cooling measures before being released.

Altadena Station Deputy Dan Paige said the rescue team was called in to help a hiker whose pet dog, a six-year-old female golden retriever, had refused to walk on the trail. AMRT crews hiked for about two miles up the trail before locating the hikers – a 39-year-old male and a 42-year-old female who are both Pasadena residents.

Their dog, named Spicey, had become overheated after a 12-mile hike.

“A crew from the United States Forest Service, Engine 11 was called in to assist Altadena Rescue Team due to the remoteness of the area and extremely high temperatures,” Paige said.

As the rescuers were carrying the dog in a wheeled stretcher, they found a second dog, a two-year-old male Dachshund mix named Dodger, also suffering from heat-related illness.

AMRT members carried the second dog for about a mile. After about 30 minutes, Dodger’s owner felt ill and had to be given water and cooling measures. The hiker was further treated at the beginning of the trail and released.

Paige reminded hikers to only take dogs out in the evening because most dogs are not able to handle high temperatures like people are.

He said hikers should also carry enough water and make sure their cellphones are fully charged before they take off.

“Mortality rates for dogs that have overheated is 50 percent,” Paige said. “This includes animals that are taken to the vet immediately after prolonged exposure to heat.”