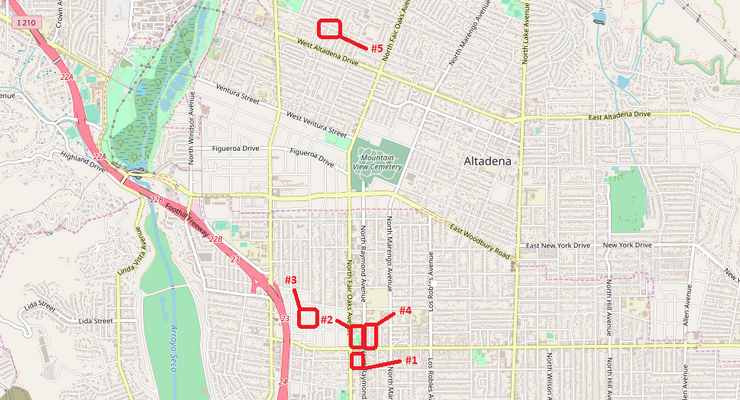 [Upadted]   A 48-year-old Altadena man was shot and wounded Friday night at about 8:30 p.m. when he was returning to his home near the intersection of Palm Street and Olive Avenue.

Authorities said the man was struck multiple times by gunfire.

Los Angeles County Sheriff’s Department Lt. DeMarkus Smith said the victim was walking through his front doorway when he was shot. Witnesses heard a car speed away, but no description of the car or shooter is known.

The victim was transported to a local hospital for treatment. His condition this morning is not known.

Deputies told local media there is no suspect information or motive in the Altadena shooting.

This shooting came against the backdrop of two shootings in Pasadena on Friday.

Almost simultaneously, police were called to the scene of a shooting by a group of people reported on La Pintoresca Drive, directly south of the Park. Aguilar said evidence of a shooting was found at that scene.

No victims were found at either location, he said, and no gunshot wound victims were admitted to any local hospitals from these incidents.

Then at 10:14 p.m. police were called to a second Friday night shooting, this one in the 1500 block of Glen Avenue.

There were no victims in that incident either, Aguilar said, but a vehicle and a residence were struck by bullets and police found at least ten casings at the location.

These shootings come on the heels of a Thursday night incident in which a known gang member presented himself at Huntington Memorial Hospital for treatment of a non-life threatening gunshot wound.

That man, a 40-year-old Pasadena resident, refused to cooperate with authorities.

The night before, on Wednesday at about 9:50 p.m., an unknown man who shot at a group of young people in the 1400 block of North Raymond Avenue.

A 17-year-old teen from Altadena was hit in the leg and was treated at Huntington Hospital.

The suspect was driving a white sedan when he reportedly pulled up near where the group was and started shooting.

Authorities have not said officially if the spate of shootings is gang-related.

Anyone with information about the incident is encouraged to call the Los Angeles County Sheriff’s Department at 1-800-222-TIPS ( 8477 ),

Pasadena Police at (626)- 744-4241, or you may report information anonymously by calling Crime Stoppers at (800) 222-TIPS (8477); by using your smartphone to download the P3 Tips mobile app on Google Play or the Apple App Store; or by using the website www.lacrimestoppers.org.