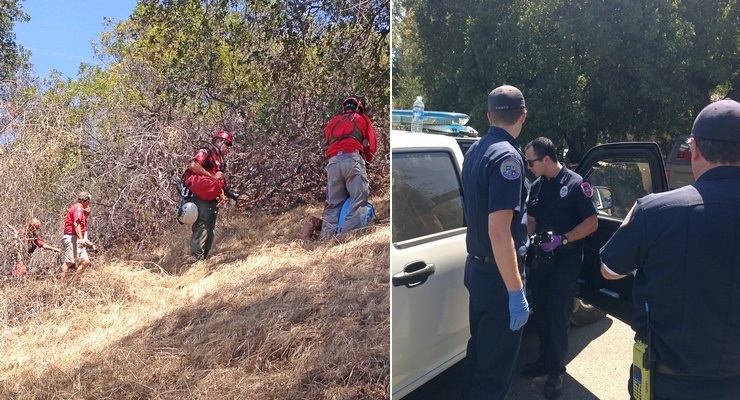 Today at 11:00 a.m. the Altadena Mountain Rescue Team responded into Coyote Canyon, in the Angeles National Forest, for the rescue of three hikers stranded in a canyon.

One of the stranded hikers was able to use their cell phone to call her family member, who notified the Altadena Station and request help. The rescue team was able to reach the hikers after approximately one hour, all three hikers were not injured.

Rescue crews used over 300 feet of rope to guide the hikers to safety.

The hikers were following a trail up the canyon, and hiked up an approximately one mile with an approximate 1000 foot elevation gain.

The hikers two 16 year-old and one 17-year-old girls who all reside in in the El Monte area, were hiking on a trail in Eaton Canyon, when the trail became less defined and the girls became lost.

They attempted to hike out, but the ground became too loose and crumbly to safely hike out.

Members of the Altadena Mountain Rescue Team were able to locate the hikes with the aid of Global Positioning System on the hikers mobile phone. The hikers waited under the shade of a large oak tree until rescuers arrived. The use of a helicopter was not feasible due to the hikers proximity to overhead high power lines.

The hikers were able to walk to the search and rescue vehicle after being guided out the canyon with the use of guide ropes.

As the rescue crews were hiking out a 37-year-old woman, an Anaheim resident, flagged down the rescue crew and asked for help. The woman was hiking when she became overheated and had passed out.

The Altadena Mountain Rescue Team assisted the hiker to her car, then drove her to the parking lot at Eaton Canyon Nature Center where she was treated by Los Angeles County Fire Department Engine 66 and Squad 11, then transported Arcadia Methodist Hospital.

Authorities said the teens did the right things by seeking shade, staying put and calling for help.

While crews were in the Eaton Canyon Nature Center parking lot with the teens and overheated woman, the crews were approached by almost a dozen other hikers requesting water from rescue crews.

Authorities urge the public, during this extreme heat, to use caution and limit your outdoor activities to early morning and late afternoon hours and to bring plenty of water with you.