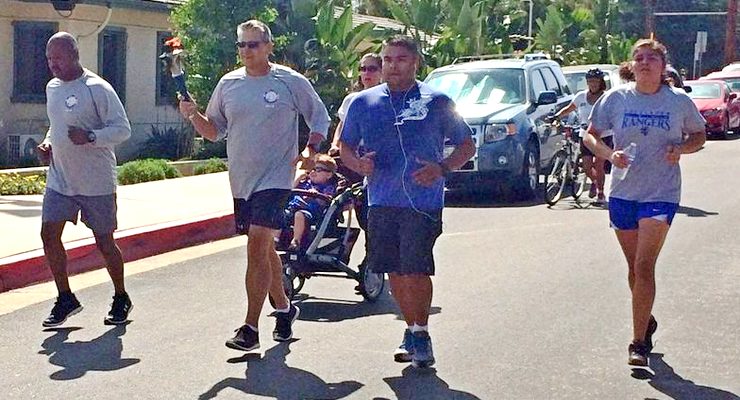 [Updated]  Altadena deputies will take part in the 38th Annual Los Angeles Sheriff’s Department Memorial Torch Relay May 15-17 to honor 18 fallen peace officers who died in the line of duty.

The Memorial Torch Relay Run is comprised of 58 legs and will start from the Sherman Block Sheriff’s Headquarters in Monterey Park, traveling more than 300 miles to end at the Altadena Sheriff’s Station on May 17. More than 2,000 runners will participate, including local deputies.

“We are taking possession of the torch on Sunday, May 17th, at Crescenta Valley Station and transporting it 7.8 miles to Altadena Station,” said Sergeant Matthew Bossier, Jr.

Community members are invited to cheer on their local deputies and family members as they run, bike or walk the 7.8 mile route.

Although the start of the route, from CVS to Windsor Avenue remains the same, the course will change to eliminate Fair Oaks Avenue, to create an easier route for participants, Bossier said.

From Windsor, deputies will travel to Ventura and around to Casitas Avenue before heading north to Altadena Drive and finishing at the station.

Local participants will stop at Fair Oaks Avenue and Altadena Drive to take possession of the lit torch.

When Altadena deputies reach the end of the route, there will be a brief memorial ceremony in the upper parking lot of the Altadena Sheriff’s Station and a free catered lunch. Lunch consists of a variety of tacos, rice and beans and a full salsa bar, courtesy of Pedro’s Tacos. Memorial shirts will be available for $15, although quantities may be limited.

“We are hoping to have enough department/community participation to line the entire route, but are especially interested in lining Altadena Drive between Fair Oaks and the station with spectators to cheer us on as we deliver the torch to Altadena Station,” Sgt. Bossier Jr., said. “Our station and community participation in this event is only as successful as we make it.”

The names of the 18 police officers honored this year will be added to the memorial wall following the last leg of the run.