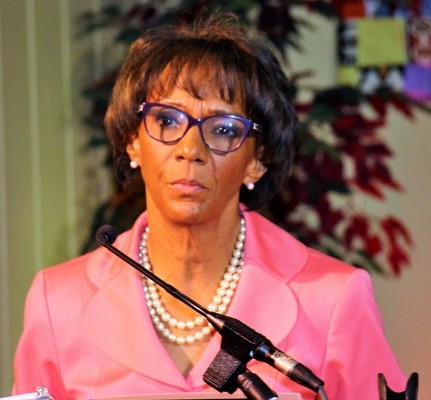 Los Angeles County District Attorney Jackie Lacey shown as she stood at the lectern during the demonstration. Lacey offered to meet with the protesters after the event, according to a witness.

The incident occurred about 6 p.m. as keynote guest Jackie Lacey, the first African-American to serve as Los Angeles County’s District Attorney, was about to speak.

About a half dozen protesters, some holding signs, began shouting and several walked down the sanctuary’s center aisle to face off with Lacey, who was surrounded by her security detail.

Pasadena Black Lives Matters organizer Jasmine Abdullah Richards is seen and heard inside the Church’s sanctuary in video of the incident.

The protesters are angry with the District Attorney’s handling of investigations into the deaths of nine young black men and two young black women during law enforcement confrontations.

As the disruption continued, one witness said he saw members of the congregation wrestle away signs and banners from the demonstrators.

“Tempers flared” and eight Los Angeles County Sheriff’s deputies physically removed protestors from the church, according to the witness.

Los Angeles County Sheriff’s Sergeant Rob Galbraith of the Altadena Station said deputies were present when the protesters were asked to leave and that “most all of them walked out, all on their own power.”

There were no detentions or arrests, Galbraith said.

The protesters were directed to a “place to protest. We sat there, we monitored them and they left peacefully and they did not return,” Galbraith said.

Law enforcement had been expecting the protest. Pasadena police were alerted earlier Sunday to be aware they might be asked to provide support should the protest require mutual aid assistance, but a Pasadena source said no request was ever issued.

The celebration had been billed as Altadena Baptist Church’s thirty-fifth annual Black History Celebration. The program was scheduled to include reflections on the continuing struggle toward equality in America, asking the theme question “Can We Make a Difference?” and “inspiring gospel music by the church’s choir and soloists.”

California State Senator Anthony Portantino was seen in the audience during the event.