The Los Angeles County Sheriff’s 8 search-and-rescue (SAR) teams are training and planning for the anticipated El Niño storms predicted for L.A. County. Last weekend 36 SAR specialists trained for swift-water rescue response. The focus was land-based operations which primarily deal with how to rescue a victim safely out of a fast flowing river or channel without having to enter the water. Upcoming future training will certify these SAR team members as Swift-water Rescue Technicians. Many current SAR team members already possess this certification, which deals with how to rescue a person trapped in a river or channel by entering the water and making contact with them. Swift-water rescue responses are the highest level of risk to the public safety agencies who respond. One-third of all swift-water deaths are rescuers who attempt to save someone from a river or channel. 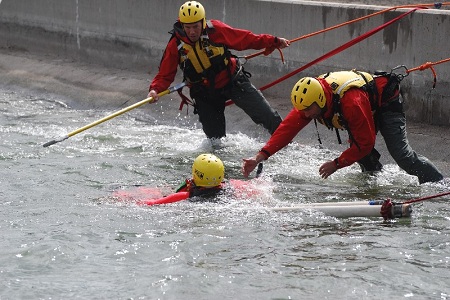 The 8 SAR teams consist of team members who live in the immediate area and they will be pre-identifying likely areas prone to flooding. They will coordinate with our public safety partner agencies who are stakeholders in flood responses. Once identified, the teams will pre-plan rescue sites for those areas including the identification of possible hazards.

Los Angeles County Sheriff’s Department Search and Rescue Team members are Reserve Sheriff’s deputies who volunteer their time to help others for $1 a year, and who partner with sheriff’s civilian volunteers who volunteer for free. There are 200 members of the eight Search and Rescue teams of the Los Angeles County Sheriff’s Department. They are all Emergency Medical Technicians and certified mountaineers. These rescuers were activated for 597 search and rescue missions last year, making it one of the most active counties for search and rescue missions in the nation. Reserve deputies and civilian volunteers are supervised by full-time sheriff’s deputies. For more info go to www.rfb.lasd.org. Did you know? There are over 700 LASD reserve sheriff’s deputies who work patrol, jails, search and rescue, motorcycle patrol, mounted posse, investigations, and more, as team members of the second largest policing agency in the nation.