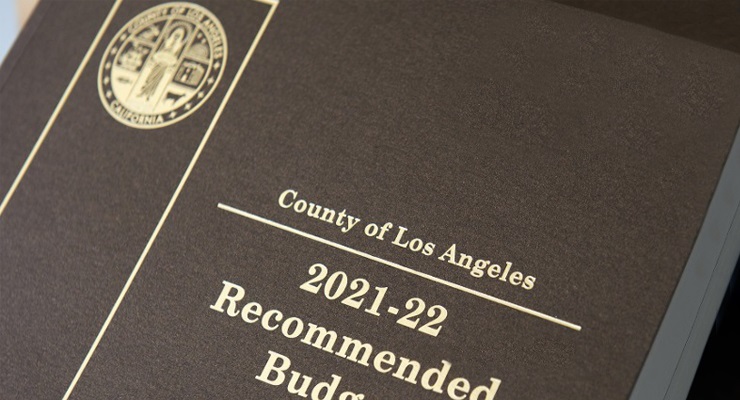 The Los Angeles County Board of Supervisors Tuesday took the first of multiple votes to adopt a $36.2 billion recommended budget for fiscal year 2021-22, which highlights spending to expand safety-net services, support economic recovery and address racial and other inequities.

The budget process will continue with public hearings on May 19 and major adjustments will be made before the budget is ultimately finalized in October. For example, the budget does not yet include roughly $1.9 billion in federal funding expected to flow to the county from the most recent coronavirus relief package.

County CEO Fesia Davenport released the budget recommendations Monday, emphasizing spending to combat homelessness and fund new social justice initiatives during that presentation and again in her recap to the board on Tuesday.

“Clearly, this pandemic has exposed and increased huge inequities between the haves and the have-nots, and the county’s safety net was called upon as never before over the last 12 months,” Davenport said. “This recommended budget is committed to sustaining these efforts using an equity lens while also positioning us for a recovery that makes the county better than before.”

Davenport pointed to $100 million in spending on Measure J, for example, as a “down payment” on the county’s promise to address racial injustice. Davenport noted that under the measure approved by voters last November, the county has three years to ramp up allocations so that at least 10% of locally generated, unrestricted funds are invested in community programs and alternatives to incarceration.

“This represents the single largest allocation for a new program in this recommended budget,” the CEO said.

The budget does not go far enough to satisfy some community advocates. Representatives of several organizations that backed Measure J issued a statement Monday evening “rejecting” the CEO’s proposal and arguing that the full allotment should be as high as $900 million.

“It is not meeting the intent of Measure J to stop cycles of incarceration and poverty,” Ale said. “Our communities deserve better; after tireless racial justice uprising and commitment to budget advocacy from the streets to the public comment podium, the county CEO is remiss to ignore the grassroots people power that led to the passage of Measure J in the first place.”

The CEO spent several minutes during the board meeting explaining that there is debate over how the 10% number is calculated. While some advocates seem to believe it should be 10% off the top of all county revenues, Davenport said the original deliberations over the ballot measure and the legal language of the measure make clear that it is 10% of “unrestricted” county revenues, a new budgeting term.

In a March letter to the board, Davenport estimated that roughly $3 billion of county revenues fall into the unrestricted category, meaning that $300 million would need to be funded by 2024. However, she stressed Tuesday that the exact number must be calculated annually based on set obligations like state and federal matching requirements and court-mandated costs.

Supervisor Sheila Kuehl reminded everyone she was the one who first recommended Measure J to the board and said she was still proud to have done so.

As a longtime activist, Kuehl said she was in the same camp as those who are calling for “more, more, more,” but, as a supervisor, had to be realistic.

“I think an initial budget allocation of $100 million is a good start,” Kuehl said. “We have never made this kind of large-scale investment.”

Supervisor Janice Hahn asked the CEO to try to come up with another $50 million for Measure J in later phases of the budget process.

The Sheriff’s Department budget is recommended to remain roughly flat to the prior year, at $3.4 billion, which is also likely to generate pushback from those who have called for shifting dollars from law enforcement to community-based services and programs. Yet Davenport stressed that the overall budget is designed to address longstanding inequality and the disproportional impact of the pandemic on communities of color.

Supervisor Holly Mitchell asked the CEO to “continue to look for opportunities to cull out inefficiencies and waste in the Sheriff’s Department” to create a department “better designed to meet the actual needs of our residents.”

Addressing the growing problem of homelessness, exacerbated by the pandemic, remains a central concern for the board. Highlighted spending includes a total of $426.7 million in Measure H funding, which includes an additional $16.6 million to increase the stock of interim housing and motel vouchers as well as more supportive housing services.

Davenport also focused on a mental health crisis that has paralleled the county’s COVID-related economic crisis. The county’s mental health helpline saw a 30% jump in calls last year, and the budget includes $29.9 million to expand crisis and intervention services.

The county also plans to hire an additional 300 promotores, or community health workers, to handle education and outreach, a quadrupling of the current number.

Of the overall budget, 33% is recommended to fund health programs, 26% for public assistance, 25% for public protection and 16% to cover other costs, including recreation and culture.

New allocations include $35 million for “fair and efficient elections” and $17.2 million for cybersecurity.

The recommended budget is $2.1 billion less than the prior-year spending plan because of the anticipated end of one-time federal funding related to coronavirus relief and because new relief dollars are not yet included. Roughly 40% of the county’s total budget comes from federal and state funding.

Davenport said she was “cautiously optimistic” about the future because of the availability of vaccines and an expected $1.9 billion in federal funding under the latest coronavirus relief package.

The budget builds off a “leaner baseline” of cuts implemented last year, but recommends no layoffs in any department. A hard freeze on hiring non- essential personnel remains in place countywide.

The CEO said that departments submitted $2 billion in requests that are not included in the recommendations, but the most critical of those requests — totaling more than $500 million — will be considered during future deliberations.

Public budget hearings will be held May 19 before final budget deliberations in June. Even after that “final” submission, additions and changes will be made to the budget before it is adopted in final form in October.

Tuesday’s board meeting was largely an early opportunity for both board members and advocates to push for programs and services they believe are essential but not included in the budget.

Many county employees called for hero’s pay for themselves and others like them who stayed on the front lines and took special risks during the pandemic that sometimes kept them from their families. Many volunteered to act as disaster service workers and took on new, more dangerous responsibilities as a result.

A parks maintenance worker talked about having to clean up restrooms after homeless people washing up there and his fear of infection — he said one of his co-workers died of COVID-19. A social worker told the board about buying masks and hand sanitizer for families he visited in person in some of the county’s hardest-hit neighborhoods.

A registered nurse at Olive View Medical Center recalled responding to a code blue call during the early stages of the pandemic and finding a woman unresponsive in her car from COVID-19.

“I remember running fast for PPE,” she told the board, sharing that the woman could not be saved. “I ask that you recognize and respect your heroes … the ones who went to work while the world stayed home.”

Hahn and Supervisor Kathryn Barger both expressed support for the idea of hero’s pay.

“I hope that moving forward we can look at the hero’s pay and how this county can, in fact, thank our employees for the work that they’ve done,” Barger said.

Barger also pushed for setting aside money for the county’s rainy day fund to prepare for future downturns and emergencies, saying the economic repercussions of the pandemic remain unknown.

“The demand for county services, such as food, housing, and health and mental health care, in conjunction with the increase in unemployment and homelessness, is staggering,” Barger said in a statement issued after the vote.

Supervisor Hilda Solis said she agreed that spending on Measure J should be higher, but then underscored that it will be phased in over three years and said the county would learn over time from this new step in the budgeting process.

She pointed to a variety of other efforts to support alternatives to incarceration, including spending on “care first villages” that provide interim housing and supportive services and a push for more mental health beds. She called for more gang intervention programs.

“All of these efforts are designed to move the county closer to a care first model,” Solis said.

The board set May 19, rather than the originally proposed May 12, for public hearings on the budget.