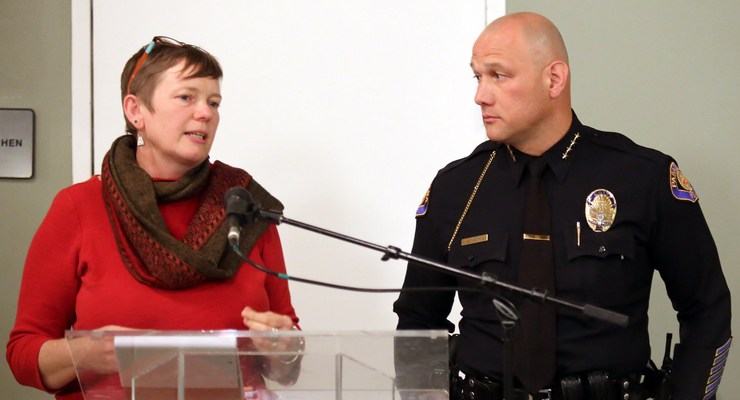 Interim Pasadena Police Chief John E. Perez, who fully assumes the office today, made his debut appearance in that capacity before a Council last night, but it wasn’t in Pasadena.

Perez appeared before the Altadena Town Council at the packed Altadena Community Center to read a brief statement.

He had been encouraged to appear by Altadenans concerned about the presence and actions of Pasadena police in their town, galvanized by a November, 2017 incident in which two Pasadena officers broke the leg of an Altadena man during a traffic stop inside Altadena town limits.

A cellphone video of that incident went viral and drew worldwide attention to the violent arrest.

Since then, many Altadenans have pressured their Councilmembers to set limits on Pasadena police involvement in their community.

After a quick greeting, Interim Chief Perez, a 33-year veteran of the Pasadena Police Department and reportedly a former Altadena resident, read from a letter he sent to Chair Okorie Ezieme and the Town Council.

Read Perez, “The Pasadena Police Department is proud to acknowledge the Altadena Town Council and all its members who support the cities of Altadena, Pasadena and the surrounding areas. Altadena is located at the heart of our great community and has a rich history of serving its constituents, business owners, residents, and visitors alike.”

Commenting on a recent community meeting in Altadena, Perez said, “Under your stewardship, specifically with direct invitation from Councilwoman Veronica Jones, I have personally witnessed the positive impact that ‘Days of Dialogue’ has had on our community when we met for discussion in Altadena on April 11, 2018. Mrs. Jones’ passion, spirit, and tireless effort to serve our community is the foundation of your longevity. It is clear to all who witnessed these shared efforts that a powerful servant-leadership creates community partnerships that are built on love, respect and trust.”

Concluded Perez, “On behalf of the men & women of the Pasadena Police Department, I want to extend a heart filled thank you as we enhance our engagement, put high value on partnerships, collaborate with transparency and enrich our diverse community.”

Council Chair Ezieme did not allow Perez to reply.

“I don’t think you need to respond to that,” Ezieme said, concluding Perez’ short appearance.

Chairman Ezieme, who commented on the brevity of the Chief’s remarks, but did not allow a response, had told Pasadena Now before the meeting, “It doesn’t matter who is in the position, we just want the correct policing of all citizens, so it doesn’t matter who holds the title, or who sits there.

“When the demand calls for it,” he added, “I think communities would like them to be open, and that was from a request that I believe we see that is moving [the department in a] direction that makes everybody feel comfortable working with law enforcement, especially PPD.”