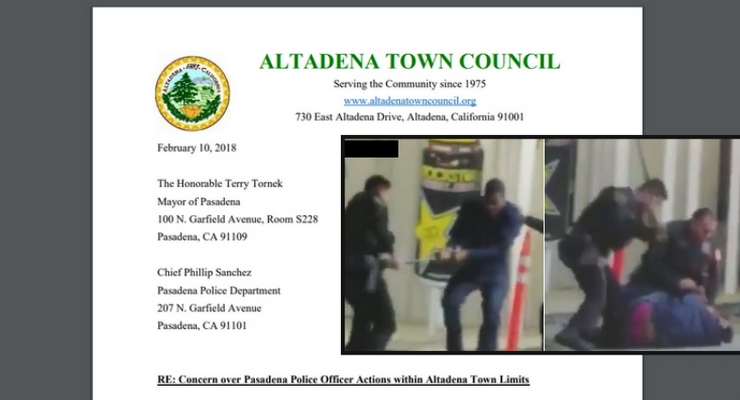 In a Feb. 10 letter to top Pasadena officials, Altadena Town Council Chair Okorie Ezieme requested that two Pasadena police officers involved in the violent arrest of an Altadena man during a traffic stop not be allowed to patrol that unincorporated part of Los Angeles County.

“In an effort to uphold the safety and quality of life of each and every one of our Altadena residents, [Altadena residents] have voiced the following requests of the Pasadena Police Department. That Officers Larry [sic] Esparza and Zachary Lujan be restricted from conducting any police business within Altadena [town] limits. Pasadena Police Officers continued presence in Altadena has resulted in at least one additional harassment incident since the incident on November 9, and poses a continued safety concern to all residents of Altadena,” the letter reads.

21-year-old Christopher Ballew suffered a broken fibula and head wounds during an encounter with the two Pasadena officers last Nov. 9. He was booked for resisting arrest. The Los Angeles County District Attorney declined to file charges against Ballew.

During that incident, Esparza and Lujan struck Ballew with a police baton multiple times and punched him during a “scuffle” in which Ballew grabbed ahold of the baton.

Pasadena officials have said an investigation into the officers’ action is underway.

The letter said that Altadena residents have expressed deep concern over the incident and about feeling unsafe with regards to interactions with Pasadena police officers inside Altadena.

The letter also claims the incident exhibits a lack of training by the officers and demands that officers “should have less heavy handed practices” when they are in Altadena.