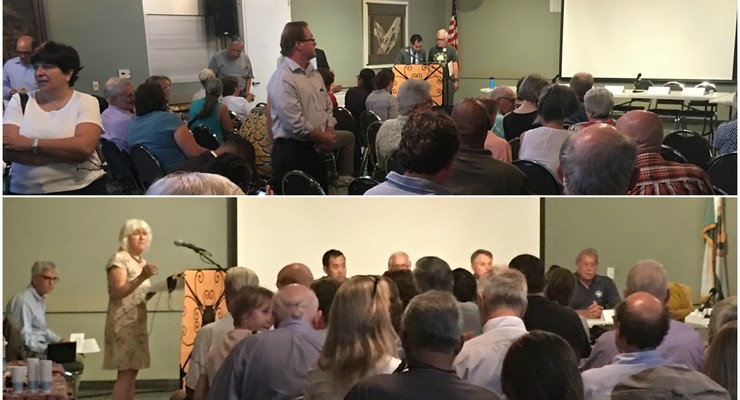 Altadena residents gathered Thursday evening at the Altadena Community Center for a panel discussion on two Los Angeles County Public Works projects — the contested plan to remove sediment from behind the Devil’s Gate Dam, and a projected plan to move collected ground water from the Arroyo Seco to Eaton Canyon.

The event was staged by Altadena Heritage, the Altadena Library and Neighbors Building a Better Altadena. Among the speakers were Chris Stone, assistant deputy director for L.A. County Public Works, Brad Bowman from Pasadena Public Works and Tim Brick, president of the Arroyo Seco Foundation, as well as the Foundation’s lawyer, Mitchell Tsai, who led the foundation’s recent victory over the County, which was forced to halt the proposed sediment removal project in March.

According to a county report, the project proposes to conserve stormwater by holding a reservoir pool behind Devil’s Gate Dam and then installing a pump station to divert and convey stormwater to Eaton Wash Dam and/or the Eaton Wash Spreading Grounds for post-storm groundwater recharge with a future potential connection to the Arroyo Seco Spreading Grounds. The pump will be installed at the Devil’s Gate Dam and water will be pumped out and conveyed through more than 26,000 feet of underground pipeline to Eaton Wash Dam where it can be held for recharge and be sent to the downstream spreading ground facilities. Construction on the project is expected to take 18 months.

Chalfant found that the project’s Final Environmental Impact Report (FEIR)“lacks substantial evidence to support (the) conclusion that mitigation would be effective, and the district will have to newly analyze any proposed habitat mitigation and perform a feasibility analysis for the use of model year 2010 or later trucks. Until this is done, the FEIR must be set aside.”

In his ruling, Judge Chalfant noted that the first phase of the project involves sediment removal and would “immediately impact emission controls on hauling trucks and excavation and removal of sensitive habitat, the subject of the mitigation inadequacies found by the court.”

Judge Chalfant also said that “the entire FEIR lacks the necessary information to support its certification.” The ruling essentially halts all aspects of the project for now, from permits to actual work.

Members of the Arroyo Seco Foundation brought the lawsuit against the the LA County Flood Control District last year, when the District sought approval to dig out up to 2.4 million cubic yards of sediment behind the dam to remove a threat that heavy rainstorms could inundate the dam and flood homes along the Arroyo Seco Channel.

The County will reportedly release a new EIR this coming Monday.

While a number of residents were concerned that the plan to move water from Arroyo Seco to Eaton Canyon through Altadena would adversely and unfairly affect the area’s water supply, Mark Pestrella, newly appointed director of LA County Public Works, said the spreading grounds behind the Arroyo Seco “are less efficient at putting water into the ground than the Eaton Canyon water spreading grounds.” The two grounds are part of three which serve the Arroyo Seco watershed.

“We want to move the water from Arroyo Seco to Eaton Canyon, so that we can be more efficient,” he told Pasadena Now. “The water that falls on the mountains above the watershed in this area,” Pestrella continued, “ is owned by the residents of this area. But when that water gets to whatever water district serves a particular area, that water is owned by that water district, and they sell that water, not the County. The beauty of the flood control district systems is that the flood control district, as an entity, doesn’t own any water rights. We have a mandate to collect more water and get it back to you through the systems that we have built. Local residents pay for that system.”

As Pestrella explained, “We fill up the bathtub full of water, which is captured by the geology, and then the various water companies have the right to place so many straws in, to pull that water out and sell it.”

The overall watershed area is served by eight different water companies, all part of the Foothill Municipal Water District.

Asked about complaints that the project may unfairly move water out of Altadena and into Pasadena, Pestrella said, “It’s all the same bathtub.”