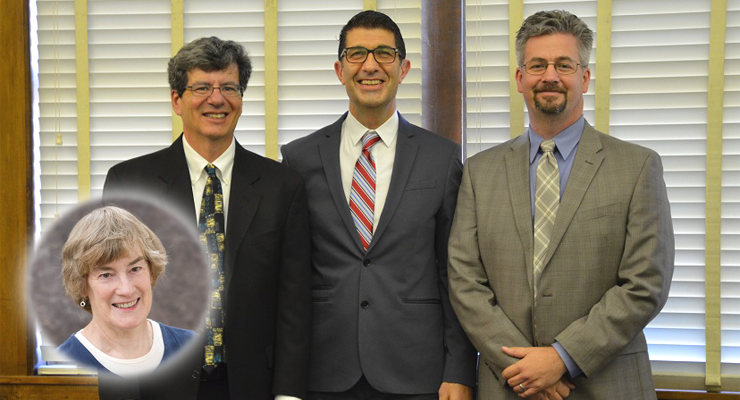 Roy Boulghourjian, Patrick Cahalan and Larry Torres were sworn into office Monday as new members of the Pasadena Unified School District (PUSD) Board of Education at the board’s annual organizational meeting Monday. All three board members were elected to office March 10, 2015. Also at the meeting, Dr. Elizabeth Pomeroy was unanimously elected president of the PUSD Board of Education by a vote of 6-0.

“I am truly honored to be in this role as board president and will give it my very best,” said Board President Pomeroy. “I plan on following the words of former Pasadena Mayor Bill Bogaard to ‘first listen’ and I hope to carry on in that same vein.” Dr. Pomeroy was originally elected to the board in 2009 and currently represents District 5.

Following the election of Dr. Pomeroy as board president, Kim Kenne was re-elected as board vice president and Roy Boulghourjian was elected board clerk.

Roy Boulghourjian has been a resident of Pasadena for over 30 years. He has spent over 20 years as an educator teaching high school math and economics including serving as a vice-principal for four years. Currently he is a college professor and department chair at Mt. Sierra College in Monrovia. He has served as a board member of both the Pasadena Educational Foundation and the Measure TT Citizens’ Bond Oversight Committee. Before becoming an educator, Boulghourjian worked in the construction field and later in the diamond wholesale business. Roy has a passion for languages and speaks Armenian, French, Arabic and Turkish in addition to English. He lives with his wife Ema and their two daughters, Sharon and Meg. Roy loves staying active by playing basketball as often as he can.

Patrick Cahalan has a long career in educational technology, beginning in the mid-1990s at Loyola High School in downtown Los Angeles. His current position is manager of technical operations for the Computational and Mathematical Sciences (CMS) Department at Caltech, where he has worked since 2002. Pat has a master’s degree in information systems and technology, and is a Ph.D. candidate in information systems and technology at Claremont Graduate University (CGU), with a research focus on designing information systems for regional?wide disasters such as earthquakes and hurricanes. His two minor programs are in CGU’s schools of politics and economics as well as organizational science.
Prior to his election to the PUSD School Board, Cahalan served on the District Advisory Council of PUSD, most recently as vice chairman, and the School Site Council at Longfellow Elementary, most recently as chairman. His wife Kitty Cahalan is president of the PTA Council of PUSD and the former president and current treasurer of the Longfellow Elementary PTA. Pat and Kitty have two children attending PUSD schools.

Larry Torres first started teaching in the Los Angeles Unified School District in 1986. Hired as a junior high school social studies teacher in El Sereno, he was a pioneer in the middle school movement in Los Angeles. In 1993 he moved to City of Angels School, an alternative K-12 program that works with students who need a non-traditional educational experience. He grew up in nearby Eagle Rock before moving east to attend college. Mr. Torres graduated from Trinity College in Hartford, Connecticut with a double major in history and political science. He attended the Harvard Graduate School of Education where he earned a master’s degree in teaching, curriculum and learning environments. He also received a certificate of advanced study from Harvard for completing a year of study past his master’s degree. Torres also received an Ed.M. from the UCLA Graduate School of Education and Information Studies in educational administration. He is a National Board Certified Teacher, an honor fewer than 3% of teachers earn.

There is currently one vacant seat on the board with the election of Tyron Hampton to the Pasadena City Council. The board is scheduled to determine the process of filling the vacant seat for District 3 at a special meeting May 7th.