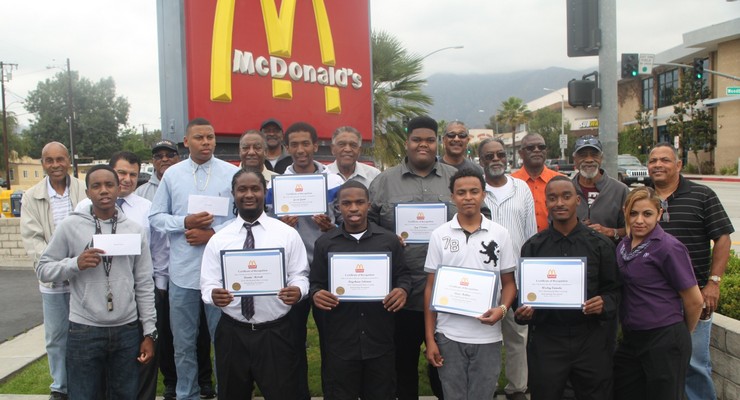 Passing the hat for Muir High School graduates who have overcome obstacles is an annual tradition for an informal group of retirees who meet daily at the McDonald’s on Lincoln Avenue (at Woodbury) in Altadena.

By chipping in together and hitting up a few friends (including recently elected District 1 City Councilmember Tyron Hampton), the McDonald’s Men’s Group raised $2,400 which was divvied up into $300 scholarships for eight college-bound young men from Muir’s Class of 2015.

“This is our way of showing these young men that we’re proud of them and that we support them as they move ahead into the future,” stated group member Ernest Johnson. Another of the McDonald’s Men, Keenan Selico, added, “Our goal is to help these young men realize the importance of graduating high school and going on to college so that they can make their mark on the world.”

Summing up the effort, William Bradley stated, “This is about ordinary men stepping up to support and inspire the youth.”

The 2015 recipients of the McDonald’s Men’s Group scholarships are: Dorrell Caldwell, Wesley Canada, Jay P. Carter, Jessie Grant, Daniel Harris, Louis Hollins, Deonta McCall and Rayshaun Solomon. “I’m really grateful to receive this scholarship which will be beneficial as I further my education at Pasadena City College,” commented Wesley Canada. Jessie Grant, who will also attend PCC, spoke for all of the awardees when he said, “As we pursue our various goals, it means a lot to get a vote of confidence from individuals like McDonald’s Men.”
The McDonald’s Men’s Group expresses gratitude to McDonald’s Store Owner Paul Pernecky, Area Supervisor Everardo Jimenez, Store Manager Jorge Cobos and Assistant Store Manager Laura Garcia.
For additional information on the McDonald’s Men’s Group scholarships please contact Tecumseh Shackelford at (626) 840-0925.