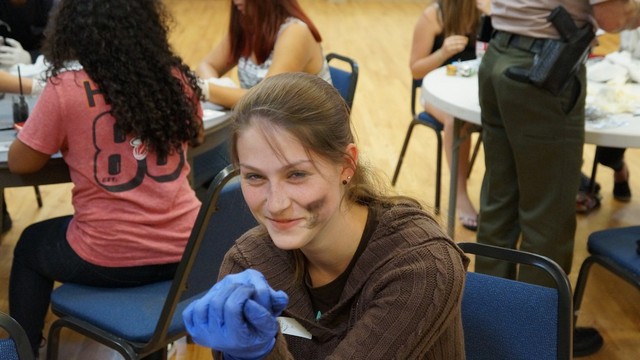 The CSI camp is a project initiated by the Los Angeles County Sheriff’s Department in the hope that it would inspire participants to maintain an interest in a CSI career or other investigation-related jobs.

While at the camp, the kids were given the opportunity to learn about crime scene investigations in a realistic setting and actually performed hands-on training on questioning witnesses, examining fingerprints and conducting polygraph or lie-detector examinations. These were all done with the supervision of deputies and LA County CSIs.

“They had a CSI expert come in and taught the kids about how to fingerprint,” Altadena Deputy Sheriff Dan Paige said. “And we actually give them objects to lift fingerprints from and record and talk about what we look for. We also have the kids do three shoe impressions, so they got the shoe impressions and fingerprints.”

The participating kids were aged between 11 and 17 years old, Paige said.

Altadena’s Search and Rescue Team, which includes many of Altadena’s sheriff deputies, also taught the kids the basics of rescuing stranded or injured people. During a field trip while training, the kids saw how the Altadena Special Enforcement Bureau operates, and also witnessed the tactics and equipment employed by the station’s SWAT team under its Crime and Security Branch.

“They got to see all the equipment down on the eastern facility, and they went on an actual crime scenario where they were broken off into two groups,” Paige said. After training sessions, the kids did homework related to presenting a case to an actual district attorney based on the results of a full CSI operation.

One of the sessions during the five-day training tested the participant’s acquired skills by presenting them with a demonstration vehicle, where they had to lift fingerprints from and examine bullet remains to know whether they’d learned enough about evidence collection which is crucial to a crime-scene investigation.