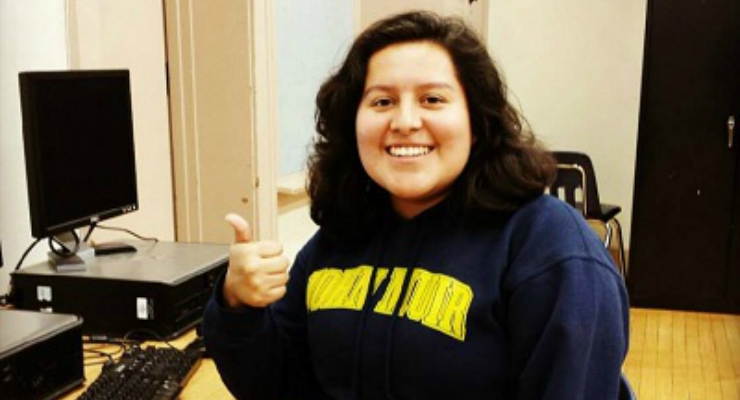 College Access Plan (CAP), a Pasadena nonprofit that provides free programs in college preparedness and success, has announced that Kimberly Mejia of Altadena has officially been named a Gates Scholar.

CAP has had the honor of supporting hundreds of underserved students who attend Pasadena’s public schools as they reach for their college dreams. This year, CAP assisted three students, Mejia, Logan Patton and Cecilia Valle, who were all selected as finalists for the Gates Millennium Scholars Program (GMS).

Kimberly, who attends John Muir High School, first came to CAP as a freshman participant in CAP’s Footsteps to College leadership program, which encourages students to be leaders around the issue of college attendance at their school and provides participants with college readiness resources and individualized staff support. Logan and Cecilia began attending CAP as juniors, and all three students regularly attend CAP’s drop-in after school program at Muir, which runs in partnership with the PasadenaLEARNs after school program. The Gates application process includes writing eight personal essays and submitting transcripts and multiple recommendation letters, and all three students worked diligently through this challenge with support and cheering-on from CAP’s staff, their teachers, and their counselors.

When she was named a finalist, Kimberly told CAP, “In December, I was on the verge of deciding not to finish the [Gates Millennium] application. It was a very intimidating application, but I received so much support from CAP. I can’t believe that I almost did not submit the application because now I am a finalist!”

Now an official Gates Scholar, Kimberly, who has also won scholarships from the National Elks Foundation and was named an Edison Scholar, is deciding between UC Berkeley, UC San Diego, and Cal Poly San Luis Obispo as her top schools to attend next year. Logan is deciding between UCLA, UC Berkeley, and UC Davis, and Cecilia will attend Cal Poly Pomona as an Electrical Engineering major this fall.

Thousands of underrepresented minority students apply each year for the opportunities the GMS program offers. According to the GMS website, the program “selects 1,000 talented students each year to receive a good-through-graduation scholarship to use at any college or university of their choice.” Gates Scholars receive “personal and professional development through…leadership programs along with academic support throughout their college career.” (http://www.gmsp.org/).