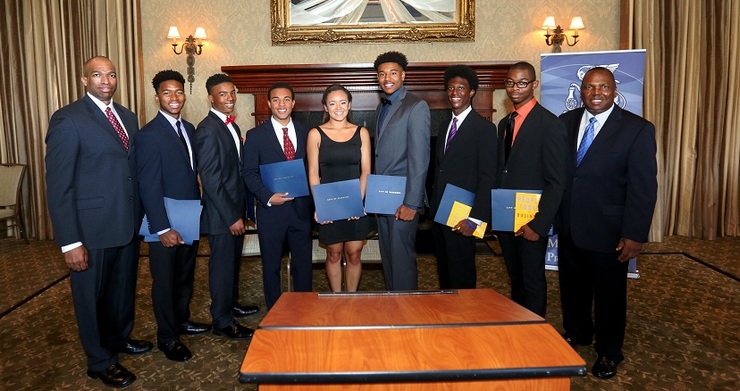 The Gamma Zeta Boulé Foundation (GZBF) hosted its annual LAMP Mentor Program luncheon on May 31 at the Altadena Town and Country Club, honoring the LAMP Mentor Class of 2015 before a packed house of some 260 family members, friends and supporters.

The Honorable Chris Holden, California State Assemblymember, 41st District, the keynote speaker, gave an inspiring presentation on the importance of mentoring youth in order to attain future success. He also shared stories about influential leaders who mentored him on his path to high achievement.

Actor, producer and director Wren T. Brown, noted for his appearances in such films and television shows as “Waiting to Exhale,” “Under Siege 2: Dark Territory” “Everybody Hates Chris,” and “Grey’s Anatomy,” hosted the event.

Richard Allen Williams, MD, received the Leadership Award for his achievement as a compassionate humanitarian and outstanding physician. Dr. Williams is also the founder of the Minority Health Institute and the 2014 recipient of the American Heart Association’s Lifesaver Award.

The Honorable Judy Chu, U.S. Representative for California’s Thirty-second Congressional District and the Honorable John Kennedy, Pasadena City Councilmember made special appearances at the reception before the luncheon and presented the students with proclamations from the United States Congress and the City of Pasadena. Congresswoman Chu stated that she was extremely impressed with the success of Gamma Zeta Boulé Foundation’s LAMP Mentor Program. She reminded the audience that she presented the Gamma Zeta Boulé Foundation with a DiverCities award last year in recognition of its exemplary mentorship program.

Annika Lars, a Polytechnic School graduate, was the recipient of the Taryn Lisa Johnson Endowed Scholarship. This special scholarship, established by Ms. Genita Johnson, is awarded to a deserving young lady each year to assist with college expenses. This year, Gamma Zeta Boulé Foundation worked in collaboration with the Alpha Kappa Alpha (AKA) Sorority – Eta Lambda Omega Chapter in Pasadena to select Annika, who will be attending Harvard University as a Pre-Med major.

The LAMP Mentor Program is a ten-month curriculum that lasts from September to June and focuses on soft-skill training with an emphasis on Leadership, Achievement, Management and Professionalism (LAMP). Successful completion of the program allows the students to compete for the awards. The program is available to male high school students (grades nine through twelve) who want to attend and graduate from the college or university of their choice. There is no cost to the students or their parents. For additional information, please visit gammazetaboule.org.