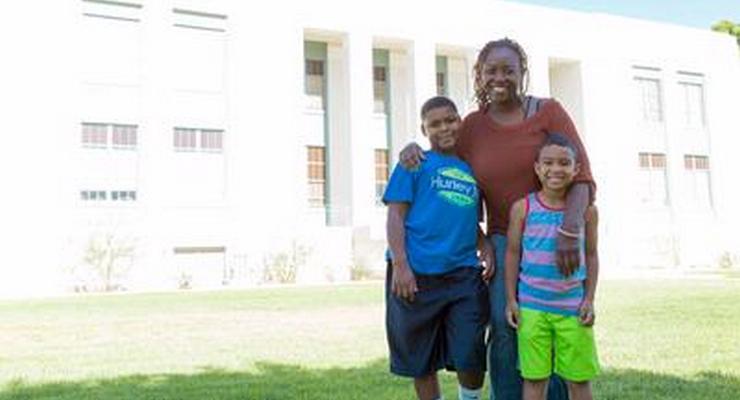 Two years ago, when the Rose Bowl Stadium was nearing the tail end of a $182 million makeover, Leah Whetstone witnessed the large-scale construction firsthand, affording the local resident a newfound perspective that would change the course of her life.

“The construction trucks rolled in and out and all of the rebar was being put up,” Whetstone said. “I saw all that activity and I said to myself, ‘I want to be a part of that.’ ”

At the time, Whetstone was working part-time as a flagger, directing traffic to and from the worksite. But watching all the construction activity from afar made her realize that she wanted more of a challenge.

“I wanted a career where I could grow and challenge myself,” she said. “So I looked into the construction industry.”

Finding a regional school that offered a formal construction program wasn’t too difficult. But as a grandmother of two with a part-time job, finding courses that would fit into her busy schedule complicated the search.

A year ago, that all changed.

That was when a friend told Whetstone about Pasadena City College’s tuition-free, noncredit courses – something she never knew existed.

“[As a local resident], I knew about PCC,” said the 53-year-old. “But I couldn’t believe they offered classes for free.”

Whetstone did the research and found PCC’s Apprenticeship Preparation Program – offered through the college’s Noncredit Division – was the best fit for her. The 16-week course offers students the basic skills needed to gain entry into paid apprenticeships in the construction trades. No pre-requisites are required other than a high-school diploma or an agreement to enroll in a GED program.

PCC for Free
If PCC’s Noncredit Division is the college’s best-kept secret, it’ll have a hard time keeping it that way. Interest in PCC’s noncredit programs has increased steadily over the past few years. From Spring 2013 to last semester, enrollment in the college’s tuition-free courses grew 22 percent.

With more than 300-plus day and evening courses offered concurrently with PCC’s semesters, the “there’s something for everyone” mantra holds true for the college’s noncredit programs.

“When I came here from Mexico, English was the biggest barrier for me,” said Maria D. Juarez Fonseca, who immigrated to the United States 15 years ago. “Even with my background, I just couldn’t communicate well.”

Fonseca already had a high school degree from Mexico, but one employer told her the degree didn’t meet all the requirements under the U.S. education system for a high school equivalency.

“My goal was to improve myself,” said Fonseca, 48 and a mother of two. “So I enrolled at PCC. I was able to study, work, and take care of my family at the same time.”

Fonseca completed the Adult Basic Education program to sharpen up on her reading and writing in English skills. She also graduated from the Adult High School Diploma Program.

Just recently, Fonseca received her Certificate of Completion in Business Office Systems. “When you get a certificate, it opens many doors in the employment world,” said Fonseca, who now works part time at PCC’s Community Education Center, where most of the noncredit program courses are housed. “It also makes you realize you can learn a lot more.”

Adult Education for the Community
As many as 5,000 students roam the halls of the CEC over the course of a semester. Located on Foothill Boulevard just two miles away from PCC’s main campus, the facility has served local communities for almost three decades now through its brand of Adult Education courses.

Although it’s seen its share of changes over the years, the last few have been its most dynamic for noncredit programs. In 2012, state Gov. Jerry Brown announced his support of Adult Education through Assembly Bill 86, which made $25 million for planning and implementation grants available to California community colleges and their local K-12 feeder districts.

Some of the priorities of AB 86 included the development of short-term Career Technical Education programs with high-employment potential and education programs for adults with disabilities.

James Hwang, a 23-year-old special needs student, is currently enrolled in the English as a Second Language program. He already has a printing and photocopy technology certificate and plans on taking graphic design courses this fall.

He hopes to be a translator one day.

“I’ve always wanted to go to a college,” said Hwang, a Temple City High School grad. “I like the courses here. It’s what I’m looking for.”

Hwang’s mother, Pei Fang Hwang, said the classroom experience and the courses he’s taken have changed her son’s life. “He’s changed and matured in this college-like environment,” she said. “It’s also shaped his personality and sociability. Not only has his English improved, but also his life skills.”

Just recently, Gov. Brown announced that he would spend $500 million in Adult Education for 2015-2016. With the windfall, PCC administrators have already made plans to leverage those funds into further developing and modernizing its existing noncredit curriculum.

“This is a new era in adult education,” proclaimed Dr. Ofelia Arellano, PCC dean of Academic Affairs and head of the college’s Noncredit Division. “And the fact that it’s offered tuition-free is what we’re really proud of.”

Building a Better Future
Beginning next Monday, PCC will hold a four-day open house at the CEC to showcase its many offerings. The public is invited to learn more about the Noncredit Division’s new certificate courses, including “green” landscaping, construction, and housekeeping; and workplace readiness.

The first open house begins at 9 a.m. and will be held in the Welcome Center at the CEC.

Whetstone, the grandmother of two, probably won’t need to attend any of the open houses. That’s because she’s already completed the Pre-Apprenticeship Preparation program offered at PCC.

Besides, she has her eyes on something else: getting into a journeyman program through the Local 300 union, which represents several construction trades throughout the Los Angeles County.

“I’m very proud of myself, at my age, to have gone back to school and get my foot in the door of a career that can be both challenging and rewarding,” she said. “There aren’t a lot of women in the construction industry, so I was intimidated at first. In fact, there were only two other females in a class of around 30 when I first started in the program. Some of the men dropped out, but the other two females like myself got a Certificate of Completion.”

Although Whetstone said she isn’t completely certain of what trade she wants to specialize in (she said she’s still very much interested in flagging and safety), completing the apprenticeship program has gotten her off to an ideal start.

“PCC definitely opened the door for me,” she said.

To learn more about the Noncredit Division’s Open House, which begins at 9 a.m. on Aug. 17, call (626) 585-3000. For more information on the noncredit programs, visit www.pasadena.edu/cec.