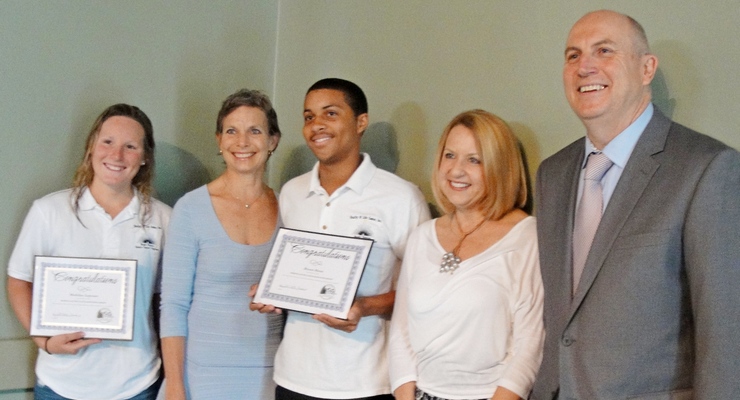 Article and Photography by LAURA MONTEROS

The Wullschlager scholarship is given to two graduating senior students who attended PUSD schools and live in Altadena. For the past two years, the Chamber has worked with Dr. Sandra E. Thomas, CEO of Quality of Life Center to choose students from the Bright Future Scholars program.

Wullschlager’s daughter, Kathryn Wullschlager, spoke about her mother’s involvement in the public schools and the community. She said her mother would be “honored and proud” that after a hiatus, the scholarship program was restarted last year.

“I know it was meaningful to Mom,” she said. “She was always involved in the schools, since I was in kindergarten.” Marion, a real estate broker, had intended to start a music foundation to help keep music in PUSD schools, Kathryn said, “but it morphed into a general scholarship.”

Both Moore and Lepesant have been Bright Future Scholars since 7th grade.

Lepesant said, “I thought it was neat that they had things for students who are challenging themselves academically. Dr. Thomas cares so much for us that I wanted to continue in it.” Both were enthusiastic about the training, mentoring, and leadership opportunities they were given.

Moore is enrolled at Pasadena City College and plans to transfer to USC or UCLA in pre-med with the goal of being a radiation oncologist.

“Cancer is such a debilitating disease,” he said. “I felt that my personality is best suited to helping people in need. I just like helping people.”

While at Marshall Fundamental School, he mentored students and helped them prepare for high school, and held offices in the Empowering Leaders Club, Black Student Union, and Unidos.

Lepesant has been accepted to Hamilton College in New York and is considering majoring in International Studies. She comes from a bicultural and bilingual family and speaks both English and French, studied Spanish at Pasadena High School, and hopes to take Italian in college. She wants to “help people on a global scale” and is considering how best to do that.

Lepesant participated in the California Scholarship Federation and National Honors Society, holding the offices of vice president and president and is a confirmation leader and peer counselor at St. Philip the Apostle Church. She was on the PHS swim team for three years and worked summers as a lifeguard and teaching swimming at Pasadena City College. She has been tapped for the Hamilton team.