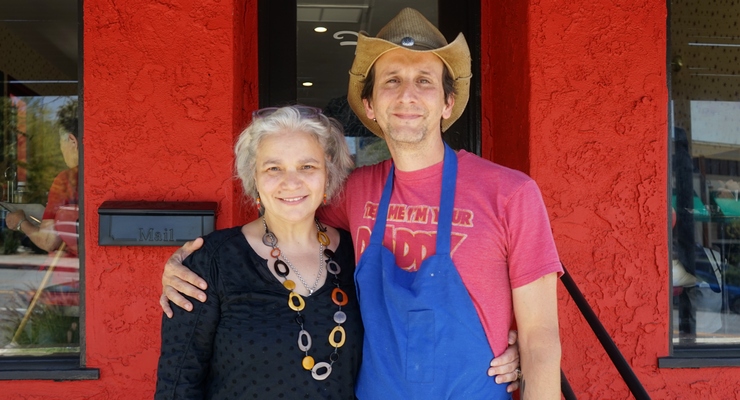 Since opening in 1955, Fox’s Restaurant on Lake Avenue in Altadena has served as a neighborhood staple for good eats and no-frills breakfast and lunch.

After longtime family owners put it up for sale last fall, new owners and chefs Paul Rosenbluh and his wife Monique King intend to keep that tradition alive.

While some change can be good, regulars need have no fear — Fox’s is still the same Fox’s Altadenans have come to know and love.

“Fox’s is like Cheers. Everyone wants to go where someone knows your name,” said Fox’s Restaurant co-owner Paul Rosenbluh.

“I was never going to come in and build a gleaming new sushi bar or anything like that because that’s not what this place is. What this area needs desperately is just a good neighborhood restaurant. That’s all we’re looking to do,” said Rosenbluh.

Rosenbluh and his wife are experienced restaurateurs who understand the importance of preserving the traditions found in family dining spots.

Their resume most notably includes their purchase of the diner Cindy’s in Eagle Rock in 2014.

At the time, it was an aging neighborhood diner in need of some serious overhaul, but with a little bit of tender loving care, a new culinary focus, and attention to preserving tradition, Cindy’s has taken on a new life.

Rosenbluh plans to do the same thing in Altadena, which he says is ripe for a new Fox’s.

“You’re coming into a community that’s wildly underserved and there’s really almost nothing up here and there’s nowhere to build anything new,” said Rosenbluh. “To come in and to be able to have a piece of that pie is very enticing from a restaurateur’s point of view.”

Fox’s Restaurant originally opened in 1955 by Altadena residents Paul and Edith Fox and was purchased by son Ken Bertonneau in 1967 where it remained in the family until last November.

“It’s been in the exact same family the entire time which is ridiculous. The more I got to know them it became an important thing to carry on that tradition of what they’ve created and built,” said Rosenbluh.

Just a year ago, Rosenbluh says he would never have expected to be the new owner of Fox’s.

“It kind of fell in my lap. I was not looking at all,” said Rosenbluh.

“It just kind of happened. Next thing you know I’m buying a restaurant,” said Rosenbluh.

The purchase comes at the perfect time in Rosenbluh’s life.

“My kids are older now so it works out great,” said Rosenbluh.

Rosenbluh says the original plan was to reopen Fox’s within six weeks of the purchase, but challenges with obtaining various permits and other factors made for an extended seven-month debut.

“It’s just kind of what it is. You’re dealing with powers beyond your control,” said Rosenbluh.

Rosenbluh says the most noticeable changes are in the menu thanks to Fox’s now operating as a kitchen where everything is made in-house.

“We definitely did a brand new menu because we have our own style of cooking and we have our own way of putting things together, so it needed to reflect who we are moving forward with the modern history of what Fox’s will be,” said Rosenbluh.

Rosenbluh says there are also some cosmetic upgrades and changes that regulars may notice.

“There are definitely aesthetic changes but we worked really hard to keep the vibe of what this place has been forever which is a cozy little restaurant,” said Rosenbluh.

Now that Fox’s is open, his focus is on getting the staff trained properly and says it usually takes a few weeks for his restaurants to run smoothly.

Rosenbluh plans on being at Fox’s every day for at least a month and will divide his time between Altadena and Eagle Rock where Cindy’s is located.

Rosenbluh has one piece of advice for hungry customers.

“There’s nothing bad on the menu. Just come in and get anything you like,” said Rosenbluh.