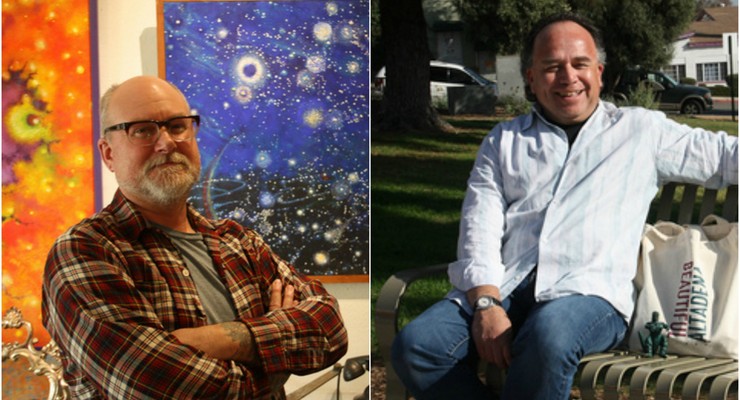 The Altadena Chamber of Commerce announces its 2017 Citizen and Business Of The Year. Both honorees reflect Altadena’s reputation as a home for creative people.

Citizen of the Year is Ben McGinty, who has spent two decades promoting the artistic community in Altadena and beyond. Business of the Year is Hugo Arteaga Graphic Design, a one-man, home-based studio with an impact seen both in and outside of Altadena. 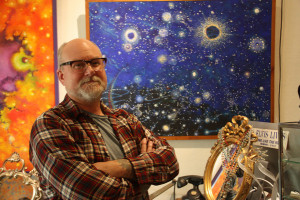 CITIZEN OF THE YEAR: BEN MCGINTY

Ben McGinty’s favorite saying is: “You can’t walk a square block in Altadena and not find at least three if not more artisans and their families living there.” And he should know.

A second-generation Altadena native, McGinty opened a vintage and collectibles store in 1994 on Lake Avenue that eventually evolved into “The Gallery At The End of the World” — so-called because Altadena was so far from the usual places where LA artists gathered.

The Gallery was a venue and hangout for LA-area artists, with McGinty curating regular group shows, or “art benders.” Besides the gallery space, McGinty transformed the building’s small parking lot into a funky outdoor patio with a small trailer and stage, under an overflowing trumpet vine arbor. The unique setting was featured in two books: Peaceful Places: Los Angeles (2010), and PAD: The Guide To Ultra Living (2002).

McGinty was also a force behind other artistic gatherings and events in Altadena. He helped organize the Altadena Arts Coalition, a group of artists and businesspeople. One of their first projects was to provide cheap cameras to anyone who asked, with instructions to take photos locally. The result was an outdoor art show reflecting dozens of ways to look at the community. The Coalition and other neighborhood businesses also threw the first holiday “North Lake Pole” festival, a street party that included real snow trucked in for sledding.

He also created one of Altadena’s first “open studios” events, where local artists invite visitors to their workplaces.

The Gallery closed in 2010, but McGinty didn’t stay away long. In 2012, he organized a major art show as part of Altadena’s 125th birthday celebration. In 2013, he opened Gallery McGinty at 869 E. Mariposa St., featuring original art and vintage items. The Gallery recently held an opening featuring the paintings of the late JPL scientist/bohemian artist Richard Davies. McGinty also organized the first Altadena Film Festival in 2017.

McGinty was nominated as Citizen of the Year by Altadena Heritage, and, according to Heritage’s Michele Zack, he breaks the usual mold. “We realized it was a non-traditional pick from the start,” she said, as most honorees are chosen for their involvement in one of the traditional civic organizations.

“He’s fostered that strong connection with the arts,” Zack said. “He’s been a wonderful ambassador for Altadena … I know people who’ve moved to Altadena through exhibiting at the Gallery.

“He really personifies the individualism of Altadena and at the same time he is a real civic leader. For people who really value the arts, when they talk about Altadena, it’s always the arts, the creativity, the quirkiness of it. To us, there’s never been anyone who personifies it more than Ben.” 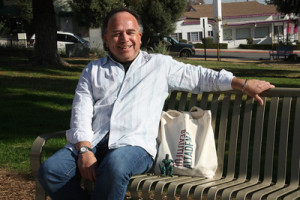 “I’ve always been a designer,” said Hugo Arteaga, whose home-based one-man graphic design firm is Altadena’s Business of the Year. “It’s fun,” Arteaga said. “I hate when they say it’s work. It’s what I do.”

Arteaga’s designs can be seen all over Altadena and Pasadena. Most prominently, he’s the designer behind the “Beautiful Altadena 91001” (™) line of merchandise, but he’s also involved in any number of local businesses and nonprofits, and has an active presence in social media.

Arteaga was working as an in-house designer for a medical company when he moved to Altadena in 2001. At the time, he said, he was single and wanted to get out of Valencia, which was small and family-oriented. Three months after moving to the more bohemian Altadena, he met his wife Dianne (they have a son, Riley, 12).

Arteaga had been itching to start his own design shop for awhile, and made the plunge full-time five years ago. He knew business wasn’t going to come to him at first, so he worked on getting out of town clients. But he knew “there’s a need in Altadena.”

He started by emailing local businesses to see if he could help. Through word of mouth, he developed a strong Altadena/Pasadena base, although now he has clients as far away as Florida.

Arteaga has been the “go-to” designer for many high-profile local projects. He designed the program book for Altadena’s 125th Anniversary celebration in 2012, and branched into exhibit design for the Altadena Historical Society. According to Altadena Chamber vice-president Meredith Miller, “if you have seen artwork, posters, and flyers about town, they are in many cases the work of Hugo Arteaga … we are lucky to have Hugo’s commitment to make our local businesses look extremely professional in the public eye.”

His clients also include the Pasadena International Film Festival and Pasadena Educational Foundation, as well as industry leaders like Buena Vista Pictures and StemCyte.

A social media expert, Arteaga has a busy professional Facebook page that often promotes other businesses and events in Altadena, and has developed a social media seminar to help businesses navigate this new arena.

While a social media maven, Arteaga prefers the personal touch with his clients. “A lot of my work … I like them to see it in person — to hold it, fold it, open it, flip it,” he said.

“When I have a client, I want to learn something about that client,” he said. Design is “taking their information and doing an interpretation, to make it look like quality when they present it. If it’s a little ad, that’s the most important thing to them. I try to put care into every little piece to convey what they want to say.”

Citizen of the Year Ben McGinty and Business of the Year Hugo Arteaga Graphic Design will be honored at the annual Altadena Chamber of Commerce installation dinner, Friday, Feb. 9, 2018, at the Altadena Town & Country Club.