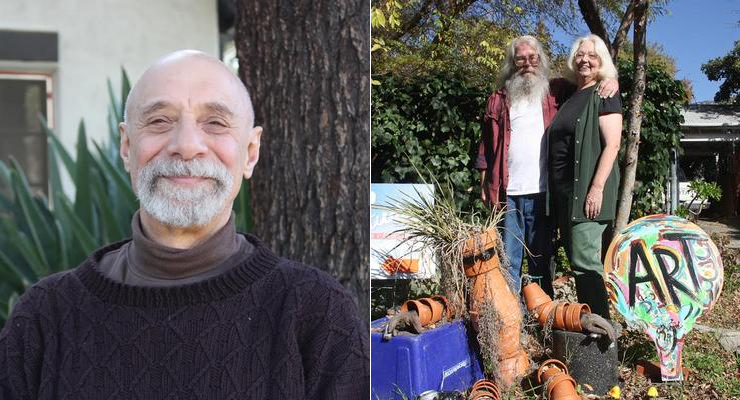 A neighborhood activist and an organization that promotes and supports local artists were named as Citizen and Business of the Year for 2016 by the Altadena Chamber of Commerce and Civic Association.

Author Elliot M. Gold, co-founder of the Altadena Coalition of Neighborhood Associations (ACONA), was named Citizen of the Year for his lifetime of work bringing neighbors together. Business of the Year went to Open Studios Alta/Pasa/Dena, which hosts a twice-yearly tour of artist studios in Altadena and north Pasadena.

The winners will be honored at the Chamber’s Annual Awards and Installation Dinner on February 3, 2017, at the Altadena Town & Country Club.

Elliot M. Gold has spent 45 years in Altadena building up his neighborhood — and the neighborhood is all of Altadena.

Gold, 72, was named 2016 Citizen of the Year as one of the founders of the Altadena Coalition Of Neighborhood Associations (ACONA), an “association of associations” seeking answers for local concerns. The godfather of the “Upside-Down T” neighborhood association, Gold has spent a lifetime putting neighbors together.

As a Jet Propulsion Laboratory engineer in the 1960s, he organized an early neighborhood association from his original home on Mariposa Street, holding semi-annual block parties. In the early 1990s, he did it again at his current neighborhood, called “Upside-Down T,” after the intersection of West Palm Street and La Corona Street that defines the neighborhood.

The 40-some houses in the neighborhood are dubbed “the greatest neighborhood in Altadena” by Gold, who with his wife Shirley regularly update and distribute a phone list and residential map of “T” neighbors so they can look out for each other. The “T” holds neighborhood parties each year — for the winter holidays, a street party in June, and a pool party in August — and they also do Halloween big. Gold preserves it all in pictures, which he used to share as prints for keepsakes, but now shares (along with videos) at the “T”’s own website.

Working with other neighborhood associations, Gold helped start ACONA several years ago because “we needed an organization that allowed the neighborhoods, through their associations, to be vocal,” Gold said. ”And, in return, to hear from people that they’ve been trying to get ahold of or needed to hear about.”

Over 500 people have attended ACONA meetings, held about every two months at the community center. The guest speakers and question/answer session takes 90 minutes, a time strictly monitored by Gold. It is followed up with an online survey, which determines the two topics of the next meeting.

Typical topics include coping with the drought, dealing with county regulations, zoning compliance, and crime prevention. The biggest concerns, Gold says, are not crime, but noise and pollution or litter.

Gold’s commitment to the community has gone beyond the neighborhoods. In the late 1960’s and early 1970’s, he became involved with the Altadena Sheriff Department and the Pasadena Police, hosting “sensitivity training sessions” where a local psychologist worked with middle class whites, poor and middle-class African Americans, and the Altadena Sheriff to discuss how to work together.

He was also a photographer for the now-defunct Pasadena Eagle newspaper, covering activities and news in Pasadena and Altadena. He also wrote a column, “Shaggy’s House,” (named after his dog, who supposedly was writing it), which looked at what was going on in local law enforcement.

Wanting more time to raise their two sons, Gold and his wife Shirley, also a former JPL engineer, formed Telespan Publishing Corporation in 1981. Telespan, headquartered in their home, produced a weekly newsletter documenting activities in the teleconferencing field, as well as holding related workshops and conferences. Working from home allowed Gold to be involved in school and scouting activities. As a Scout leader, he earned the Silver Beaver Award, the San Gabriel Scout’s highest award for adult participation. Gold has also served on the Sheriff’s Community Advisory Committee as co-chair, a position he held from the late 1990s to early 2000s, when he briefly became chairman.

In retirement — besides ACONA — Gold has written and published several books, most recently Rememories: The Music and Memories That Shaped Our Lives, and The Chosen Few: A 40-Year Look at an Outlaw Motorcycle Club, drawing on his years riding with and photographing one of the first racially integrated motorcycle clubs.

What’s the secret to getting neighbors together? Food, Gold said. Food is a part of every Upside Down “T” fathering: “Food takes the blood from your brain and puts it in your stomach, and slows down some of the negative parts of your brain,” Gold said. “It’s amazing what happens when you listen to your neighbors.”

Business Of The Year:

It’s appropriate that Altadena, a longtime home for artists, has an arts organization as its 2016 Business of the Year.

For the past three years, Open Studios Alta/Pasa/Dena has opened up the artistic treasure of Altadena and northern Pasadena to the wider community. Two weekends a year, Open Studios holds a free self-guided public tour where area artists share their studios and their art.

It all started small in 2004: Mary Gothard, a local textile artist and photographer, and her husband Patrick, a prolific painter, opened up their Altadena home studio to public tour as a way to promote their art. Pleased with the result, they continued to open up their studio twice a year, and invited other artists to show.
Mary Gothard says the current version of Open Studios was born in discussions with co-founder Ginkgo Lee, a local ceramicist and graphic designer. They wanted to make the event bigger, to attract more people and more participating artists.

“When we first started it, it was to introduce artists to the community where we all work and play,” Gothard said. “That way neighbors can know neighbors, friends can know friends, and artists can get together with like-minded folks.”

“The whole project came out at the inspiration of Patrick’s studio, to make it a party,” Ginko Lee said. “You have food, conversation, something delicious on the stovetop. The visitor doesn’t feel like they’re in a strict environment — it’s not about ‘hush, hush,’ they’re not afraid to ask questions.”

On an Open Studios weekend, dozens of artists open their workplaces to visitors of all ages. Most studios are joined by guest artists, who also show their work. Visitors can pick up a guidebook and map that with the studio locations. And of course you can purchase the art.

As it has grown, Mary Gothard said, “Before, everyone was doing everything, but now we have an admin team, promotion team, development, artist liaison … and it’s all volunteer, nobody’s paid.”

To help it succeed and prepare for growth, Mary Gothard says they are working to become a 501(c)3 corporation (Open Studios is currently a sole proprietorship with Mary Gothard). They also count on relationships with other organizations in town, especially the library.

“We love Open Studios and have a great partnership,” said Mindy Kittay, Altadena Library director. The Library has held opening receptions for the weekend and displays art from Open Studios artists. “The library itself is about the experiences and opportunities,” Kittay said. “We provide the community with access to art that they might not normally see.”

Open Studio’s mission is to create a good experience for the artist as well as the public: the artist’s fee is $100 per show, but can be reduced to $50 if they volunteer during the show. “We don’t turn artists away if they can’t pay,” Gothard said. “We work it out, we get sponsorships, and people are more and more interested in advertising in the brochure.”

Open Studios is growing its community presence. It hosted booths at the Altadena Guild’s 2016 Home Tour and the National Night Out, and are looking to participate in more community events. Once the 501(c)3 designation comes through, they will start community-oriented arts programs, Gothard said.