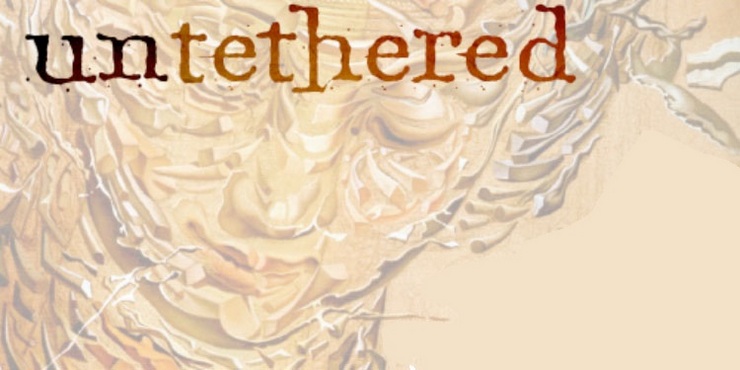 The Mountain View Mausoleum continues in its unlikely but apparently firmly set role as a staging venue as Julia Edwards’ world premiere play, “untethered” opens for a May 8 through June 7 run next month.

Plagued by nightmares of her love’s demise, Ellie pops the question out of the blue and Ari spirals into a commitment-phobic panic. Enter Ari’s estranged father, a siren from the sea, and a portal into the time-bending fourth dimension. Suddenly Ellie’s life hangs in the balance as Ari attempts to tether himself to what truly matters.

Untethered opens Friday, May 8th and runs through Sunday, June 7th at the home of Wicked Lit, Mountain View Mausoleum (2300 North Marengo Avenue, Altadena). There will be no shows on Memorial Day Weekend or Saturday May 30th. Performances are Friday and Saturday at 8:00 p.m., Sunday at 7:30 p.m. The play is 2 hours with an intermission. Tickets are $30 and are available by calling (323) 960-1054 or online atwww.plays411.com/untethered. The press is invited to review any performance. Untethered is a project of the Pasadena Arts Council’s EMERGE Fiscal Sponsorship Program www.pasadenaartscouncil.org.

Julia Edwards (Playwright) has shown her plays at The Public, South Coast Repertory, Chalk Repertory, Echo Theatre Company, and Salvage Vanguard Theatre, among others. Her play FAMILY PLANNING (Chalk Rep) was performed site-specifically in residential homes and won the LA Ovation award for Best Production in a small theatre. Her play LOCKDOWN is published with YouthPlays and has been performed in high schools across the country. Her most recent play for young audiences, SCAREVILLE, received a reading at the 2015 Ensemble Studio Theatre LA Winterfest. She is the founder of Pasadena Storylab, a creative writing center for children. She holds a BA in Semiotics from Brown University and an MFA in Playwriting from UCSD.

Jen Bloom (Director) is a founding member and Resident Director with Santa Monica Rep where her directing credits include: Memorandum, How I Learned to Drive, The Learned Ladies, Brecht-cerpts at the historic Brecht house, and Shakespeare’s The Tempest at the Annenberg Beach House, with support from an individual ARC Grant from CCI. Jen has worked on new plays with Chalk Rep, Rogue Machine Theatre Company, Theatricum Botanicum and the LA Playwrights Union. Jen developed the site-specific Performing Arts and Puppetry Program at the LA Natural History Museum in collaboration with Erth/Visual & Physical Australia and the Jim Henson Creature Shop. She has an MFA in Acting and Directing from Trinity Repertory Conservatory and is on the Acting Faculty at AMDA College and Conservatory of Performing Arts.

Joy Osmanski (Ellie) is a professional actor. She has booked guest and recurring roles on “The Loop,” “Samantha Who?,” “Grey’s Anatomy,” “On the Lot,” and most recently, “Better Off Ted,” “NUMB3RS,” and “It’s Always Sunny In Philadelphia.” Theatre remains close to Joy’s heart, however, and she treasures opportunities to work on stage. Joy has worked with Chalk Repertory Theatre, A Noise Within, Mark Taper P.L.A.Y, San José Repertory Theatre, Red Ladder Theatre Company, La Jolla Playhouse, the Yale Cabaret, and the Met Theatre. Joy has shared her love of acting with a wide variety of students–children of all ages, at-risk youth, men and women in jail, teachers, college students, beginning and advanced actors. MFA: UCSD/La Jolla Playhouse, BA: Principia College.

Adam J. Smith (ARI) is a professional actor, director and teacher. As an actor, his regional theater credits include: 12 Angry Men (NAACP Nomination), Intimate Apparel and Matter of Honor at the Pasadena Playhouse; Private Lives and How the Other Half Loves at the International City Theater; Three Sisters and Family Planning with Chalk Rep; Beauty at the La Jolla Playhouse; Mozart & Strauss at the Disney Concert Hall with the LA Philharmonic, as Mozart; Tennessee Williams Festival and the Edinburgh International Fringe Fest. TV/Film: “Taken 3,” Scandal, 90210, Medium, Castle, Without a Trace, Numb3rs, Victorious, As The World Turns, “Zombie Strippers,” among many others. Currently teaching on Faculty at CalArts School of Theater. MFA: UCSD/La Jolla Playhouse, BA: Duke.

Stephanie Zaletel, born and bred in Las Vegas, NV completed her BFA in Dance Performance/Choreography with a minor in Humanities at the California Institute of the Arts. Upon graduating, Stephanie has performed for locally and internationally renowned choreographers ranging among Barak Marshall, Stephanie Nugent, Colin Connor, and in Danielle Agami’s Ate9 dANCEcOMPANY. Along with dancing in Ate9, Stephanie also worked closely with Danielle Agami as the company’s stage manager, administrator, and rehearsal director in 2013-2014. Stephanie has performed and presented her own creative work at REDCAT, ARC (Pasadena), Highways, Live Arts Los Angeles, The Electric Lodge, Pieter Performance Space, ArtShare LA, and has performed in the Benicassim Festival in Spain. Stephanie has taught contemporary/modern dance for all ages as well as movement classes for children with Down Syndrome at Lineage and is on the Pieter Performance Space Council. Stephanie is the founding artistic director of szalt.

Steven Kai van Betten is a Guitarist/Composer/Teacher, who is actively involved in the Los Angeles creative music community. At CalArts, Steven studied jazz and composition while expanding his horizons into the realms of experimental music, classical music, and traditional folk music from India, Indonesia, and West Africa. Steven now composes and performs with several ensembles in Los Angeles ranging from very intimate chamber folk music to improvised contemporary jazz, and performing at venues such as The House of Blues, The Troubadour, The Echo, The Bootleg Theatre, and Levitt Pavilion, Pasadena. His current projects include: Fell Runner, Copper Root and Kidi Band.

Brian was born and raised in Los Angeles, California and studied technical theatre at California State University Northridge. He’s had the opportunity to work on all aspects of design, but lighting has really sparked his interest. Brian is currently working with New Court Theatre on Lyle Kessler’s Orphans. It is Brian’s goal to help bring theatre to inner cities and expose today’s youth to an art form that has been so influential in is own life.