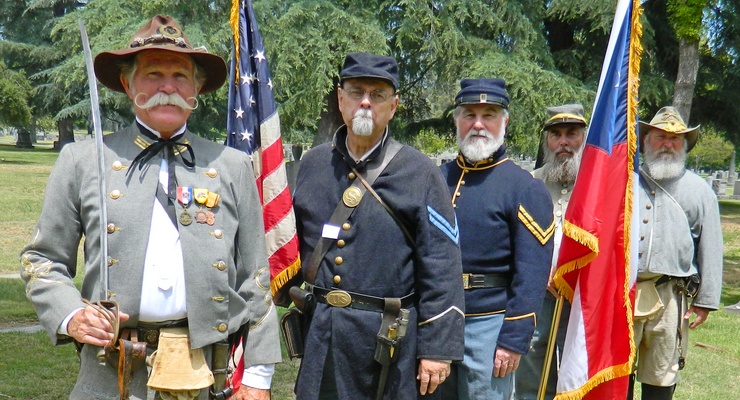 Civil War soldiers will come to life again as volunteers don authentic military garb and pay honor to all veterans with a barrels-high gun salute on Memorial Day at Mountain View Cemetery.

Volunteers will dress in Union and Confederate garb to celebrate all veterans but paying homage to the oft-forgotten Civil War veterans in a gun salute.

Daughters — and sons — of Union and Confederate soldiers will be on hand to speak at the ceremony, slated to start shortly after twelve noon.

“We have so many volunteers that come by and add to the wonder and respect on Memorial Day,” said Denny Dormody, funeral director at Mountain View. “We have the daughters of the Union soldiers and we are blessed with so many local people who honor us with their time and knowledge of history and who contribute on this great day.”

Nick Smith, president of the Pasadena Civil War Roundtable said the Civil War occupies a special part of Pasadena’s past.

“You have to remember that Southern California was settled by the direct veterans of the War,” Smith said. “Pasadena was founded nine years after the end of the Civil War and out of that first group of settlers some of them were Civil War veterans.”

Smith, a library technician for the Pasadena Public Library, said the impact of the Civil War on American culture is underestimated and more modern history has taken its place in school curriculum. That’s why re-enactments are important.

Smith said while there are mostly Union soldiers at Mountain View, the Confederacy is also represented.

“There are over a dozen Confederate soldiers buried at Mountain View,” Smith said. “But there are so many more Union veterans by comparison.”

Smith has done his research on this topic. With the help of others, Smith checked the headstones at Mountain View to determine the amount of Civil War veterans at Mountain View. And as historical adviser, he worked with others to research the actual ceremony originally held by the Grand Army of the Republic Veterans.

“They would start in downtown Pasadena, the earliest ceremony was in the 1890s,” he said. “Before that not very many Civil War veterans were buried there. The first veteran buried there was actually moved from La Canada, his name is Adolphus Williams. Williams was a founder of La Canada.”

On Monday, Smith will take part in the ceremony and describe many of the historical gravesites at Mountain View and answer questions, prior to the walking tours planned for the day.

It will be a day of reflection and remembrance as flags are flown and Civil War reenactors in full costume, fire a barrels-high gun salute as historical stories are told, as families, history buffs and students of genealogy commemorate the sacrifice of our soldiers.

The Cub Scouts from Altadena’s Pack-1, Tiger’s Den 2 will place flags on veterans’ graves as the cemetery opens the gates at 8 am.