There’s always something new to learn at the Pasadena Museum of History. One thing is that the amputation kit on view in “When Johnny Came Marching West,” an exhibit marking the 150th anniversary of the end of the Civil War, really wasn’t an instrument of torture. Another is that a famous character in a classic children’s book may have been modeled after Altadenan Thaddeus Lowe.

Elliott Codding, a captain in the 71st Pennsylvania Company B reenactment unit, said that amputees were pretty well knocked out with chloroform, and losing a limb was preferable to gangrene. The kit was only one of many artifacts on display at the preview of the exhibitions on Saturday evening. Entertainment for the VIP reception was provided by Silver Mountain String Band playing period tunes and Assemblyman Chris Holden was on hand to present certificates to the curators.

The exhibit, curated by historian Nick Smith and PMH board member Janet Kadin, focuses on the men and women who lived in Pasadena or moved to the area after the Civil War, the role California played in the conflict, and how the aftermath influenced our local communities. The people are as diverse as decorated Gen. George Stoneman, who eventually won the California governorship, and the children of abolitionist John Brown: Owen, Jason, and Ruth. 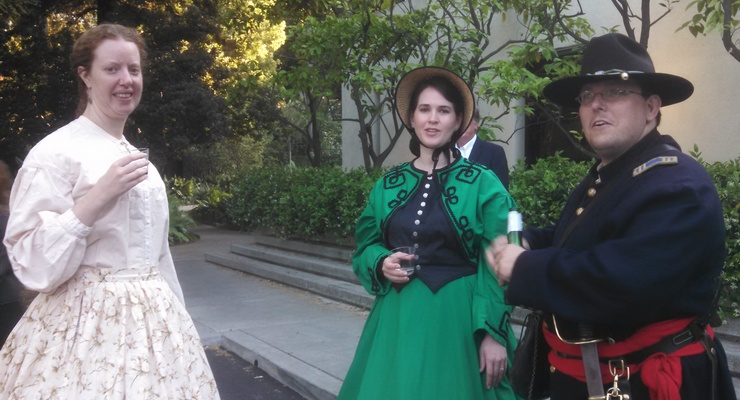 Exhibits are on loan from several museums throughout Southern California and the United States. They include two quilts, one made by a Sunday school class for the Union Army and one made for the Confederates, along with correspondence, photographs, clothing and a list of Civil War veterans who lived in Pasadena.

“Thaddeus Lowe: Chief Aeronaut of the Union Army” ties in with the Civil War theme, though locals know him better for the Mt. Lowe incline railway and the Mt. Lowe observatory, which sat between Echo Mountain and Mt. Lowe. He caught Pres. Lincoln’s attention after he built the largest balloon at the time and set an air-speed record. He used balloons to spy on Confederate troop movements from the air.

Curator Michael Patris of the Mount Lowe Preservation Society Collection, which lent the items to PMH, said that this is the first time the entire collection has been on display in one place. And that famous character? Though it can’t be proven, some of Lowe’s contemporaries averred that L. Frank Baum’s Wizard of Oz was patterned after the heroic aeronaut.

As members of the American Civil War Society, Inc., Codding and his wife Heather and friend Tracy Gorin joined the crowd dressed in authentic Civil War clothing. As a captain in his unit, Codding is responsible for the officers under him and they are in turn responsible for the recruits. The three have been reenacting for about 10 years.

“When Johnny Came Marching West” and “Thaddeus Lowe: Chief Aeronaut of the Union Army” open to the public on Wednesday, April 22 and will be displayed through Sept. 20. Pasadena Museum of History is located on Walnut St. at Orange Grove Blvd.; more information on the museum and several events related to the exhibits can be found on the PMH website. Click here for more.