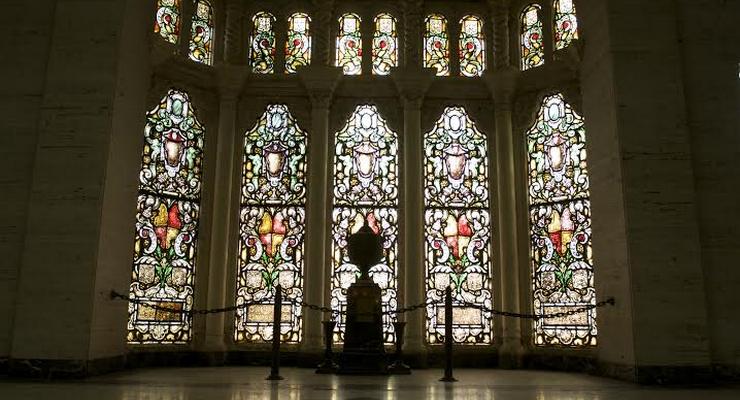 The glorious architecture and artwork of the Mountain View Mausoleum are celebrated in a new photographic exhibit by the Altadena Historical Society in the gallery at Webster’s Community Pharmacy.

The one-dozen color photos of the landmark are part of a continuing cooperative program by the Historical Society and Webster’s to present Altadena’s colorful history in a popular, accessible location.

The enlarged photos show the exterior and interior of the mausoleum, which is located at 2300 N. Marengo Ave., three blocks north of Woodbury Road, and is itself open to the public seven days a week.

“This is Altadena’s own Sistine Chapel,” said Jane Brackman, Ph.D., Historical Society president and curator of the exhibit at Webster’s.

“Most Altadenans, even those who have lived here all their lives, have driven past the mausoleum on Marengo but have never gone inside. We hope this exhibit will encourage people to visit this Altadena landmark, which is truly stunningly beautiful.”

The high, vaulted ceiling of the main building’s 180-foot-long Great Gallery was painted in Renaissance-style frescoes depicting the story of Christianity, Brackman said.

The ceiling mural by Swedish native Martin Syvertsen features more than 250 scenes and 239 life-sized figures. “It took him four years to complete, and was his last commission,” Brackman said.

Built in 1925, the reinforced concrete building is of a neo-Mediterranean style with red-tiled roof. The elaborate interior features 64 types of Italian marble, numerous stained-glass windows by Los Angeles’ renowned Judson Studios — still operating in nearby Highland Park —- and what may be glazed tiles from the famous Greuby Faience Co.

Mausoleum historians say that builder Cecil E. Bryan considered Mountain View “the crown jewel” of the 80 mausoleums that he built across the country in that era. The construction cost was said to exceed $500,000 at a time when the average new house cost under $10,000.

“The Historical Society’s exhibits in our rear entry corridor have been hugely popular with the public, and we are delighted to have this beautiful, new exhibit here for the next three months,” said Meredith Miller, Webster’s co-owner. “It’s an example of why we have ‘Community’ in our name.”