Film Maker, Historian Will Discuss His Experiences in Event Leading Up to Film Showing at the Altadena Public Library 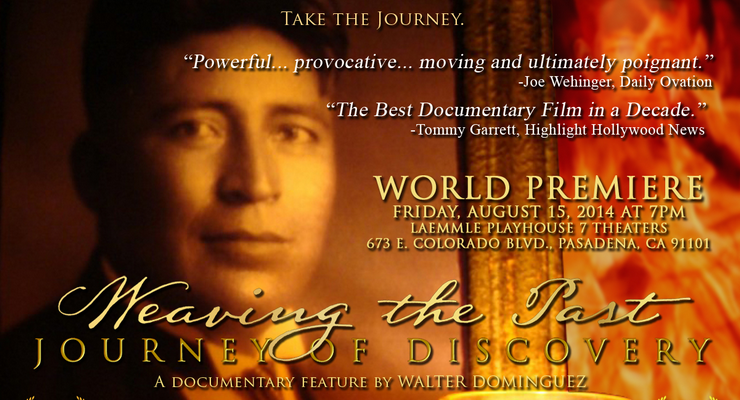 The Altadena Historical Society and Altadena Library District are partnering to present a July 27 talk by filmmaker and historian Walter Dominguez. His film, “Weaving the Past: Journey of Discovery,” will then be screened at the library the following week, August 4 at 6:30pm.

Dominguez will speak on the experiences of early 1900’s Mexican immigrants to the United States, with examples from his own family history, at the Monday July 27 summer quarterly meeting of the Historical Society. The 7:30 p.m. meeting, free and open to the public, will be at the Altadena Community Center, 730 E. Altadena Drive.

With his talk as background–though not necessary to attend– Dominguez’s two-hour documentary-drama about discovering the surprising biography of his Mexican-born grandfather will be shown 6:30-9 p.m. August 4 at the Main Library, 600 E. Mariposa St.

Dominguez will be at the screening to introduce the film, and to answer audience questions afterwards. Also present will be Shelley Morrison, Executive Producer of the film, Dominguez’s wife, and known to many as the actress who played the maid Rosario on the eight seasons of the popular NBC television series “Will and Grace.” Again, the program will be free and open to the public.

Dominguez, President of Chasing Light Pictures in Los Angeles, is a graduate of Eliot Junior High School in Altadena, and John Muir High School in Pasadena. As a youth, his family lived near the top of Fair Oaks Avenue and later on Altadena Drive. His mother, sister and cousins are still Altadena residents.

The film focuses on Emilio N. Hernandez, an anarchist and revolutionary leading up to the Mexican Revolution, but a “kindly and saintly Methodist minister” in Los Angeles when Walter knew him as a boy. In the film, as Walter learns about his grandfather, he also learns about himself, and finds a renewal of his life and a vision for the future.

“Weaving the Past” premiered at the Laemmle Theater on Colorado Boulevard in Pasadena in August 2014, remaining for two weeks, and has been shown in theaters in Orange and Ventura counties. Still, Dominguez says he continues to fine-tune the film in post-production work.

This screening is a part of an ongoing series of Latino-American library programming. Latino Americans: 500 Years of History has been made possible through a grant from the National Endowment for the Humanities and the American Library Association. The Altadena Library is located at 600 East Mariposa Street, Altadena, CA 91001. For more information please call (626) 798-0833. For a schedule of events, visit the library on the web at www.altadenalibrary.org.