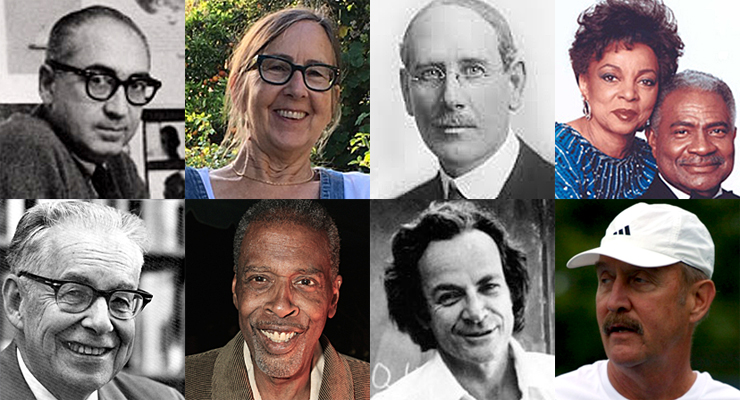 “We’ve had great fun researching and producing this exhibit,” said Jane Brackman, Society president. “The trouble has been choosing those to include, as we have far more than our gallery can accommodate.”

The show is in both the Historical Society’s gallery and in the lobby of the Altadena Community Center, 730 E. Altadena Drive, just west of the Sheriff’s Station.

“Many of the people featured are our current neighbors and gave their kind permission for us to include them, while others have passed on,” Brackman said. “In fact, we didn’t include several Altadena residents who are major stars in their fields, but cherish the privacy they have by living here.“

Current or former Altadenans included in the new exhibit include:

*Entrepreneur Horace Dobbins. Dobbins proposed an elevated bikeway between Pasadena and Los Angeles, some of which was built. His beautiful and innovative home was near the top of Lincoln Avenue.

*Tennis great Stan Smith, who trained at the Altadena Town and Country Club, winner of the 1971 U.S. Open and 1972 Wimbledon, and LPGA golfer Mo Martin, winner of the 2014 Women’s British Open.

*Mary Colter. One of America’s first and most celebrated female architects, designing and overseeing construction of iconic tourist attractions and hotels at the Grand Canyon and throughout the Southwest.

The Altadena Historical Society was founded in 1935 and is a tax-exempt non-profit whose mission is to gather, preserve and present information about the people, places and events that have shaped the community.

Groups of all ages are welcomed for docent-led tours of exhibits and archives; they can be arranged by phoning the Society at (626) 797-8016.